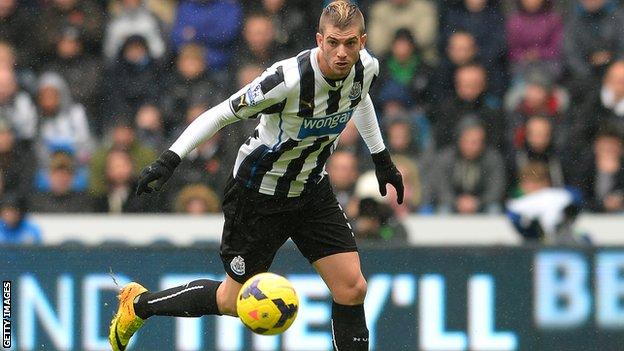 The Magpies have won their last four Premier League matches, three of which have been by a one-goal margin.

That form has seen them rise to sixth in the table, just one point from a Champions League qualification place.

"Last season we lost these tight games. Now, if we concede a goal we don't take a step back and wait for the pressure, we regroup and try to score ourselves," the defender told BBC Newcastle.

Last season, Newcastle lost five matches after scoring the first goal - it has only happened once so far this season.

In Newcastle surrendered the lead early in the second half, only to go back in front four minutes later.

And is the only game this season that the Magpies have lost after scoring first.

In their recent wins over Chelsea, Tottenham, Norwich and West Brom, only 12 players have been used in Newcastle's starting XI and Santon believes that continuity to have been key to their success.

"We know our shape. The balance is excellent and the players are used to it," Santon added.

"The confidence and calmness is there now so we don't collapse after we've conceded. That is the huge change from last season. I think it comes from knowing that we have so much of a threat in attack."