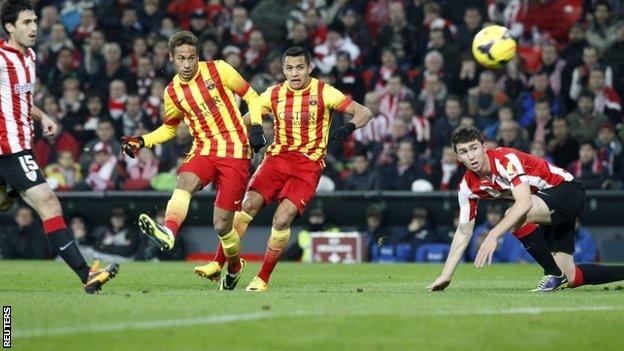 Barcelona midfielder Sergio Busquets says the club are not alarmed despite suffering a second consecutive defeat.

Following Tuesday's 2-1 defeat at 10-man Ajax, they lost 1-0 at Athletic Bilbao in the league on Sunday.

"There's no need to be alarmed, we just have to carry on. We have to learn both from our errors and the things we are doing well," Busquets said.

Barcelona, who had already reached the Champions League knockout stages before losing to Ajax, are top of the Spanish table on goal difference from Atletico Madrid and three points clear of bitter rivals Real Madrid.

Barcelona had forward Lionel Messi out with a hamstring injury. However they had played 18 La Liga matches without the Argentine over the last four years without losing one (16 wins and two draws).

Centre-back Javier Mascherano said: "Nobody lies to lose - it hurts to be beaten - but let's not forget we are still leaders.

"We're going home sad. We were more intense than against Ajax, but that wasn't enough to give us the win.

"We have to put right the things we have done badly and look at ourselves, but we've done things right too."

Argentine Martino, who had never managed in Europe before this season, thought his side squandered chances before Iker Muniain's 70th-minute winner.

"We were the better side until then," he said. "What really hurt us was their goal because we had had moments of control and some penetrating attacks.

"We aren't used to losing - particularly not two in a row. We had been looking to put things right after the defeat in Amsterdam. I think things would have been different if we'd scored first - it would have been a different game. We had plenty of opportunities to score.

"This team know what they have to do and how we have to play. I thought we saw a good Barca tonight, we came out well from the back - we knew that Bilbao would come out and press us."