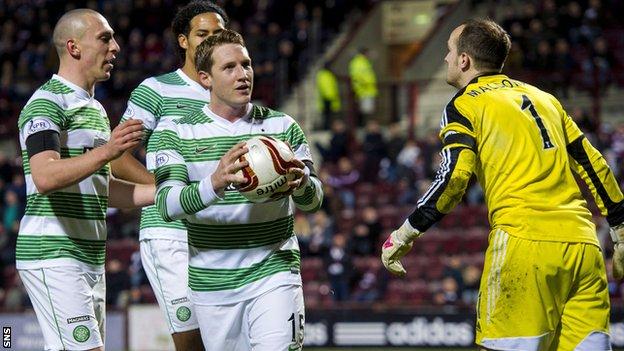 Holders Celtic have been handed the tie of the Scottish fifth-round draw, hosting Premiership rivals Aberdeen.

Another potential all top-flight tie involves Dundee Utd against the winners of the replay between St Mirren and Championship side Queen of the South.

Albion Rovers' reward for their is a home tie against Stenhousemuir.

Rangers entertain the winners of the replay between League One rivals Ayr United and Dunfermline Athletic.

Alloa Athletic at home to Championship rivals Dumbarton is the only other tie that does not await a replay.

Inverness Caledonian Thistle, sitting second in the Premiership, will travel to face either League One outfit Stranraer or League Two leaders Clyde.

The winners of the Angus derby between Forfar Athletic and Brechin City will host Premiership outfit St Johnstone.

Former Scotland striker Kenny Miller helped conduct the draw at Hampden Park and there was much speculation that there could be a tie involving two of his former clubs - Celtic and Rangers.

A first meeting between the sides since Rangers' liquidation last year was on the cards until the final three ties were drawn, with Celtic midfielder Kris Commons having said prior to the draw that he would welcome such a tie.

However, Premiership leaders Celtic, who will host the final with Hampden Park being prepared for use at the Commonwealth Games, will instead face an Aberdeen side they have already defeated twice in the league this season.

Celtic coach Danny McGrain said: "I miss Rangers games and I'm sure the players and supporters do.

"But I wasn't bothered whether we get Rangers here or Rangers in the next round or whatever.

"We deal with what we've got now and Aberdeen are going to be hard enough.

"Aberdeen gave us a hard game two or three weeks ago and I think their manager, Derek McInnes, will be happy that they've got us, maybe not at Celtic Park, but he's got another bite at the cherry."

Celtic progressed to the fifth round in emphatic style with a

"I hope we can replicate the way we played yesterday, which was just unbelievable football," said McGrain.

"The players have a challenge to replicate that flowing style of football, but Aberdeen will put up a barrier to stop us playing and, whatever that may be, we will have to overcome that."

McInnes recognised that his side could not have been given a tougher task.

"For all the players, staff and supporters, it is a great tie to be involved in and we will look forward it."

Rangers, who have recorded 18 straight wins since a shock defeat by Forfar Athletic in the League Cup, must await the winners of Wednesday's replay at East End Park.

The runaway League One leaders have already defeated Ayr at Somerset Park 2-0 in October and overcame nearest challengers Dunfermline 3-1 at Ibrox last month.

Rangers manager Ally McCoist said: "I couldn't be any happier. You can't pick and choose who you get, but all you can ask is to be drawn at home.

"Whoever we face, it'll be tough. Think back to the game Dunfermline gave us at home, where it was 0-0 at half-time and we had three boys hurt.

"We'll know what to expect if it's them, while at Ayr there was nothing in it until we scored two wonder goals down there."

McCoist admitted that there were a few anxious glances with Celtic and Rangers still to come out of the hat.

"A lot of the boys were watching the draw and we were getting a bit twitchy about what might happen with a few ties to go," he said.

"All I asked of our former striker was a home tie and we're delighted he's given us that as it's with a team from the same division as us."

Miller's two other former Scottish clubs, Hibs and Stenhousemuir, were given clear-cut ties.

The tie between League One outfit Stenny and their Coatbridge hosts, who are struggling in League Two, will ensure that at least two sides from outside the top two divisions - and three from outwith the top flight - will reach the quarter-finals.

Dundee United v Queen of the South or St Mirren

Ties to be played on the weekend of 8/9 February.