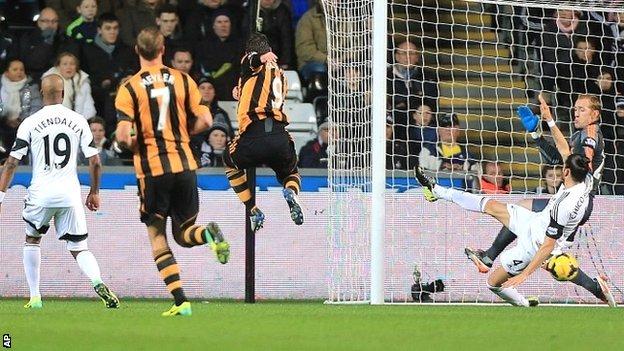 Hull's Danny Graham ended a 30-game goal drought to score against his former club Swansea as both teams earned a battling point in Wales.

Swansea were poor in the first half and went behind when Graham volleyed in from Ahmed Elmohamady's cross.

But Hull had a strong penalty appeal when Dwight Tiendalli seemed to handball Alex Bruce's header as the sides remained mid-table.

This was the first Premier League encounter between the two teams and it was hardly a classic, but they both moved up one place in the Premier League, with Swansea now in 10th and Hull in 12th.

Having lost their four previous away games, Steve Bruce's Hull side would have been more satisfied with their evening's work.

Michael Laudrup's team had striker Michu back in the side after injury but despite a promising spell before they scored in the 60th minute, they struggled to find any penetration in their final third.

Their attempts to combine Premier League and Europa League fixtures each week appear to be taking their toll.

Graham's last goal came while playing for Swansea in a 2-0 League Cup win over Chelsea on 9 January 2013.

Graham's goal was his first since he struck for Swansea in a League Cup win over Chelsea last January, a time during which the 28-year-old moved to Sunderland later the same month and joined Hull on loan last summer.

But the way he tucked in Elmohamady's right-wing cross, following Ashley Williams's poor pass, belied his form in front of goal and he showed incredible restraint not to celebrate in front of his former supporters.

Many Swansea fans would have surely allowed Graham that privilege and they applauded his actions.

They were less appreciative of their own side's efforts in the first half, though, booing their team off at half-time.

Michu all too often dropped deep and when Swansea did make inroads, Curtis Davies - who returned to the side after suspension - was on hand to clear.

Ben Davies fired over after a smart one-two with Shelvey on the edge of the box, but there was little else to show from the first period and Laudrup clearly had enough 10 minutes into the second half when he introduced Alejandro Pozuelo in place of Jonathan De Guzman.

It had the desired effect as five minutes later, the hosts were level.

Shelvey played a short corner to the substitute, took the return and delivered into the box where it hit Flores for Swansea's 17th second-half Premier League goal from a total of 21.

Steve Bruce withdrew Graham to strengthen his midfield and his side had a penalty appeal soon after when Tiendalli appeared to handball Alex Bruce's header following a corner.

That led to an improved period for the visitors as David Meyler was caught narrowly offside after being sent clear and Yannick Sagbo drew a decent stop from Gerhard Tremmel after a stinging 25-yard drive.

But as the game became more open, Michu almost put Swansea ahead as Allan McGregor stopped the Spaniard's shot with a dispute about the resulting corner, leading to a fracas between Tom Huddlestone, Williams and Sagbo.

That was as lively as it got, with Premier League newcomers Hull now five points above the relegation zone.