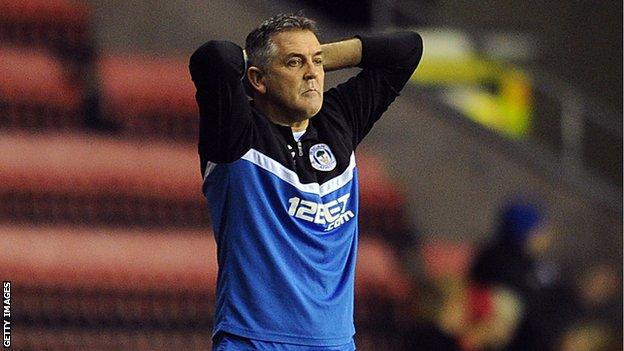 Wigan have parted company with manager Owen Coyle less than six months after he was appointed by the FA Cup holders.

A on Sunday, their fourth loss in five matches, left the Latics 14th in the Championship.

Ex-Bolton boss in June, with the task of leading Wigan back into the Premier League following relegation.

But the 47-year-old won only seven of his 23 games in charge and departs with Wigan six points from a play-off spot.

They were also in a strong position to qualify for the last 32 of the Europa League having taken five points from their first three group games, but losses against Rubin Kazan and Zulte Waregem have left Wigan dependent on results elsewhere if they are to reach the knockout stages in their first European campaign.

Coyle's departure from Wigan means seven Premier League and Football League managers have lost their jobs in the past seven days:

But Whelan, 77, later said Coyle had offered his resignation on Sunday.

"Owen asked did I want him to resign? I said 'yes' - I accepted it and he's resigned."

First-team coach Graham Barrow and assistant boss Sandy Stewart will take charge of the team for the visit to Leeds on Wednesday.

"It is with great sadness that we have made this decision," Coyle told the club website. "I would like to thank all my football staff and the staff at the club, who have been very supportive of me in my time here.

"I am confident that with this set of players the team can keep moving in the right direction."

The Latics fell 3-0 behind inside 29 minutes against Derby, and when asked by BBC Radio Manchester about a third home defeat in eight days, Coyle admitted: "It's been a horrible week.

"We went into the international break on a high and there's no getting away from it - we've underachieved in the three games [against Brighton, Zulte Waregem and Derby]. Every one of those three games, we could have won, and we've not.

"The only way to pick yourself up is to go and win the next game and then take it from there."

Martinez joined Everton around three weeks after leading the Latics to FA Cup success against Manchester City at Wembley.

Wigan turned to Coyle, who won promotion with Burnley in 2009, to guide the club back into the Premier League after seeing their eight-year stay in the top flight come to an end in May.

There was significant investment in the squad, with former England goalkeeper Scott Carson, Norwich striker Grant Holt and Sunderland winger James McClean among their high-profile signings.

However, they have rarely threatened the Championship's top six, although they do have a game in hand on many of the teams around them in the table.