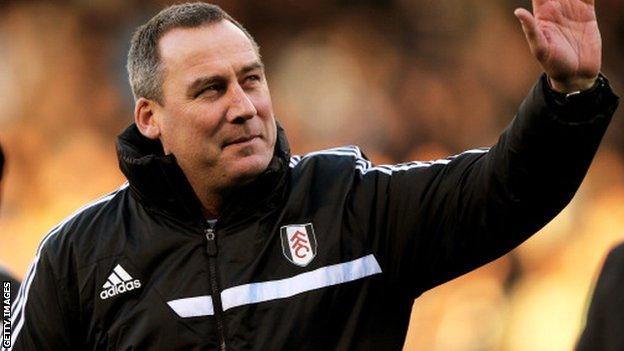 New boss Rene Meulensteen says Fulham must spend in the January transfer window to give themselves a chance of staying in the Premier League.

Meulensteen was placed in charge on Sunday following Martin Jol's sacking after five successive defeats left the Cottagers 18th in the table.

"Everyone needs to realise we must invest," Meulensteen told BBC Sport.

"We need to look how we can strengthen this squad to ensure Fulham stay in the Premier League."

Jol was appointed Fulham manager in June 2011 but was dismissed on Sunday after a poor run of form left the club three points from safety.

The 49-year-old was only appointed head coach to work alongside Jol last month after 12 years working under former United boss Sir Alex Ferguson.

"People can think what they want, but it definitely was not the case that I came in to take over," Meulensteen added in an interview with BBC Radio 5 live.

"The reason I came was to work alongside Martin Jol. We were trying to take Fulham to the next step.

"I spoke to Martin Jol straight away [after he was sacked]. We had a long conversation, for maybe 30 minutes.

"There are no hard feelings between him and myself. We have known each other for more than 25 years."

Meulensteen had initially turned down the chance to work alongside his fellow Dutchman Jol in October as he continued talks with the Qatar FA about becoming a technical director.

Manchester United striker Robin van Persie has described Meulensteen - who left Old Trafford in June after new United boss David Moyes opted to appoint his own backroom staff - as "one of the best coaches in the world".

In August, he left Anzhi Makhachkala only 16 days after being appointed head coach as the Russian club attempted to trim their wage bill.

"At the moment I am the permanent manager," said Meulensteen. "We need to make sure the players take responsibility, with work-rate and their discipline.

"Fulham have had too many poor results and we must now create a platform to get away from our position."