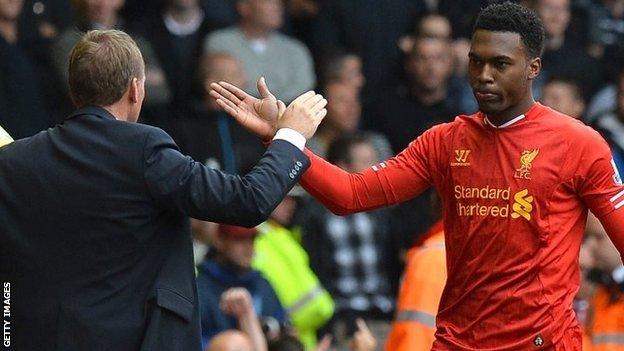 Sturridge is out for up to eight weeks with an ankle injury and Liverpool lost 3-1 to Hull in his absence on Sunday.

"The quality of our squad isn't big enough to cope with big players missing. We need as many of our good players as possible," said Rodgers.

"Daniel has been outstanding for us since he has come in. It is a bad period of time to lose him for."

Liverpool's league goalscorers other than Daniel Sturridge and Luis Suarez this season:

Sturridge, who has scored 11 goals in 14 appearances for his club this season, would miss nine Premier League games if his lay-off is at the upper end of Liverpool's prediction of six to eight weeks.

"This little period now will test us," said Rodgers. "We've got players that will come in and it's a great opportunity for them to stake a claim for a place in the team."

While fellow striker Luis Suarez has matched Sturridge's tally of nine league goals, the rest of the Liverpool squad have added only another six between them.

Spaniards Iago Aspas and Luis Alberto, signed in the summer to add firepower to the squad, have yet to secure regular first-team football, while Fabio Borini, signed for a reported £11m from Roma in July 2012, is on loan at Sunderland.

Rodgers made an unsuccessful £21m bid for Atletico Madrid striker Diego Costa in the summer. Costa, who admitted he came close to leaving for Anfield, has scored 18 goals in 17 games for Atletico this season.

Rodgers deployed Victor Moses and Raheem Sterling in support of Suarez in the defeat at the KC Stadium, but was disappointed with his side's lack of cutting edge.

"We lacked quality with the ball, we never created enough and never kept the ball long enough," Rodgers added.

"I always felt we were in control of the game but we needed to show more quality and penetrate a bit more."