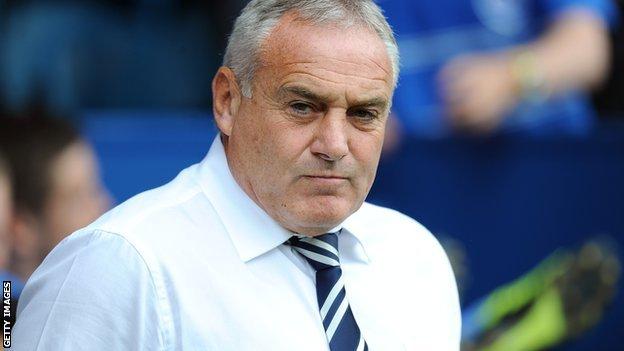 Sheffield Wednesday have sacked manager Dave Jones, with the club second from bottom of the Championship table.

The Owls have lost their last three games, with Jones' final game in charge a 2-0 defeat by Blackpool on Saturday.

The 57-year-old was appointed in March 2012, replacing Gary Megson at the helm and leading the club to promotion as League One runners-up.

Wednesday have won just one league game all season and are the only side in all four divisions without a clean sheet.

A brief statement on the club's official website confirmed Jones had been "relieved of his duties with immediate effect".

"The club would like to thank Dave for all of his hard work and wish him well for the future," added the statement.

The former Stockport, Southampton, Wolves and Cardiff manager took over from Megson with the club in third place in the League One table and, having got the club promoted, succeeded in keeping Wednesday in the Championship last season with an 18th-placed finish.

But the 2013-14 season has been disastrous for Jones and the Owls, with the club level on points with bottom club Barnsley, who sacked their manager David Flitcroft on Saturday.

The one bright spot was a 5-2 win over promotion-chasing Reading, but the crowd at Hillsborough has grown increasingly frustrated by Wednesday's performances and results.

Speaking to BBC Radio Sheffield after the loss to Blackpool, Jones blamed a "fear factor" for his team's struggles.

"When you're in a dog fight you have to fight and scrap - you have to keep doing the right things and maybe one or two aren't doing that at this moment," he said.

"You need big characters to stand up and be counted.

"The staff work their socks off here and cover everything there is to cover," added Jones, who signed a three-and-a-half-year contract when he joined. "Every player is here because we feel they can do a job for this club and we need them to dig in."

Wednesday's next game is against top-of-the-table Leicester on Tuesday, although the club have yet to confirm who will be selecting the side for the match.