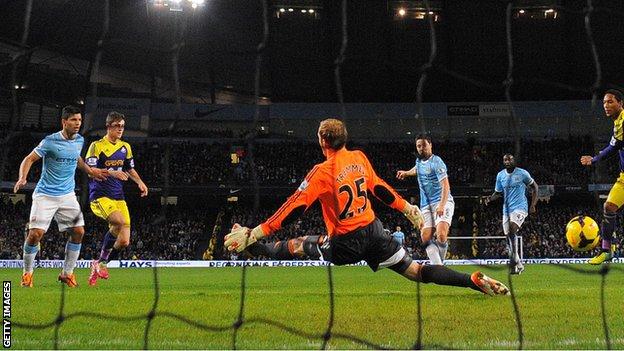 Samir Nasri scored twice in the second half after Alvaro Negredo's free kick had given City a 1-0 interval lead.

But Jonathan de Guzman missed a chance to equalise just before half time.

Laudrup said: "Maybe that's the bit of difference between having good players like we have, and then some of certain world-class players that they have."

He added: "That one-on-one situation maybe could have changed things.

"I have to say again it's strange to be standing here and we have lost 3-0 when we've done so many things well.

"Our tactics before the game was we'd try to keep the ball and I think we played a very very good first half to be fair.

"But you can see some of these players with Man City have got they just need a split second and they can turn the game round."

The result leaves the Swans in 13th place with just two wins from their last eight matches in the Premier League.

They face Newcastle at the Liberty Stadium on Wednesday evening followed by Hull City on Monday, 9 December.

"We did so many things well, we had our chances, but you need to score," added the Dane.

"Maybe if we'd have scored that goal just before half time it would have still been very difficult but we could have maybe changed the game.

"Whatever happens we have to play again in three days, we have Newcastle on Wednesday - another big game - now we have two home games so we're looking forward to that."