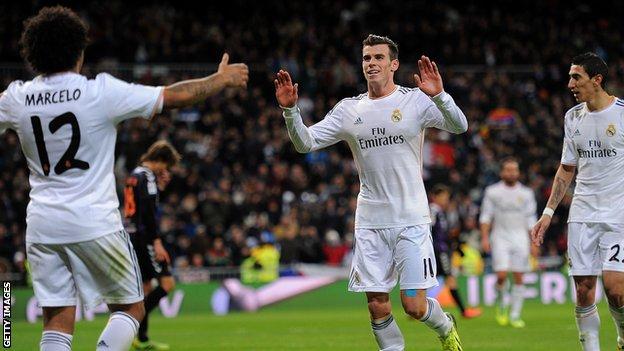 Gareth Bale says there is still more to come from him despite scoring a "perfect" hat-trick for Real Madrid on Saturday.

The Wales international, 24, scored with his head, left and right foot and also provided an assist for Karim Benzema in a 4-0 win over Real Valladolid.

"I scored three goals but I hope to do better," said Bale.

"I want to keep improving and working hard during the matches and training."

Bale struggled with a thigh injury shortly after joining Real from Tottenham for £85m (100m euros) in September.

But since starting the 2-1 El Clasico defeat to Barcelona on 26 October, he has been named in Carlo Ancelotti's first 11 in every game since, scoring eight goals.

"I'm very happy here," he told Real's official website. "I needed time to adapt after not having a pre-season but I'm improving now.

"Everything I hoped for has come true. The fans and the club are incredible."

Ancelotti praised Bale's performance and believes he is now fully settled into life in Madrid.

"He is a very important player for us," he said.

"I think his period of adaptation is over. He is doing well, he is confident and is very important for us. He did very well."

Portuguese forward Cristiano Ronaldo has scored 32 goals in 22 appearances this season, although he missed Saturday's game with a slight hamstring injury, and Bale believes his team-mate should win this year's Ballon d'Or world player of the year award.

"He's the best player in the world and he deserves the Ballon d'Or," added Bale.