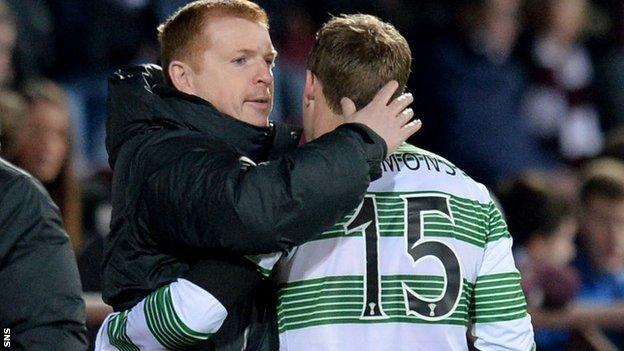 Celtic boss Neil Lennon says his side's mauling of Hearts in the Scottish Cup was the team's best ever performance in his 200 games at the helm.

And he said his aim was to construct a side that reaches the latter stages of the Champions League again.

"It's your utopia really," said Lennon. "It's certainly the best in my time.

"It took me three years to build the one who got me to the last 16, and I'm hoping that this team, you're starting to see the fruits of it now."

They've put a marker down for the rest of the season. We want to get back in the Champions League. We want to bed players in if we can get them in in January.

Celtic were 5-0 up at half-time in a game that ended with them securing a record-breaking win over Hearts.

"The first half was as complete a performance as I could've asked for," Lennon told BBC Radio Scotland.

"It's very difficult to replicate that [in the] second half. And I don't care who we were playing. People will say 'oh well, it's Hearts' young team' - you've still got to do it.

"I think against anyone today, the way the players played, somebody would've taken a beating and it just happened to be Hearts.

"The movement, the one-touch football, the finishing - which has been a bit missing.

"Commons was at his best today and [Anthony] Stokes. My midfield four were outstanding, the two full-backs - it's what you're looking for as a manager.

"Off the back of what's been a disappointing result midweek, it just speaks volumes for the character they have as well."

A 3-0 loss to Milan in the Champions League, coupled with Ajax's victory over Barcelona, means Celtic are guaranteed to finish bottom of Group H.

But Lennon, whose side reached the last 16 of football's most prestigious club competition last season, is eager to repeat the feat.

"They've put a marker down for the rest of the season," he said. "We want to get back in the Champions League.

"We want to, if we can, bed players in if we can get them in in January. But I saw enough today to know that I've got a very good squad of players that can compete with anyone on their day.

"We were so good and that's what we've been looking for for a little while but it just all seemed to come together today.

"As a player, even, I don't think I've ever been five up at half-time in a game."