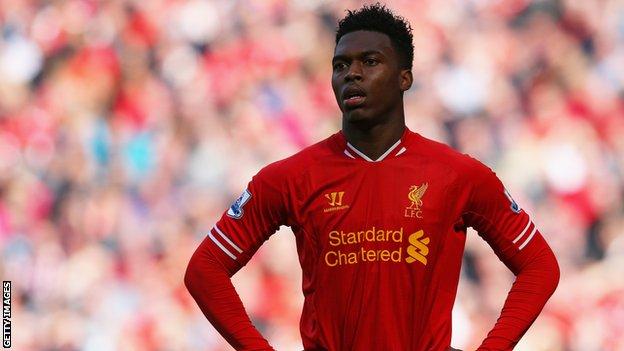 Liverpool striker Daniel Sturridge has been ruled out for up to two months with an ankle injury.

The in-form England international has scored 11 goals in 14 games for his club this season, including a late equaliser in the

But Sturridge sprained his ankle in training this week and manager Brendan Rodgers confirmed the outlook.

"Daniel Sturridge is out for six to eight weeks, which is obviously a big blow," he told Sky Sports.

Rodgers added: "It was something we thought was never going to be as serious as that.

"He slipped over in training and we initially thought it was his toe. He got brought inside straight away and was taken for a scan and it showed he'd actually got a ligament strain."

Sturridge is Liverpool's top scorer and his partnership with Luis Suarez, who struck nine goals in his first eight games this season, has helped the Merseyside club

On potential replacements for Sturridge, Rodgers added: "Raheem Sterling is a terrific player and Victor Moses is very talented. They are both hungry to do well."