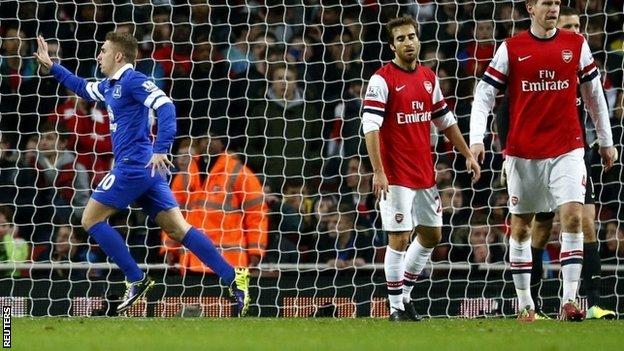 Substitute Gerard Deulofeu's late strike earned Everton a draw and denied Arsenal a seven-point lead at the top of the Premier League.

The 19-year-old smashed past Wojciech Szczesny from inside the box to cancel out Mesut Ozil's close-range finish.

Giroud hit the bar in injury-time, but the point moves Arsenal five clear of Liverpool at the top of the table.

Everton manager Roberto Martinez, who was relegated with Wigan on his last visit to the Emirates, praised his side's "lack of fear" in recent matches and Deulofeu's late strike spoke volumes for the Blues' character as they remain the only side with one loss in the Premier League.

Arsenal, who have now led in 13 of their 15 league matches, will be frustrated to have squandered the advantage having battled to break down their visitors with Ozil's fourth league goal of the campaign.

Their manager, Arsene Wenger described the visitors' midweek win over Manchester United as a "warning" for his side, but with the two best defences in the league on show, early chances were sparse despite spells of crisp passing.

Everton, who last won at Arsenal in 1996, enjoyed large bouts of possession and drew protestations from Wenger for the intensity of their pressing without the ball.

Everton's defeat at Manchester City in October remains their only league loss of the season. No side in the Premier League have proven harder to beat.

Sylvain Distin swiped a volley wide for the visitors, before Ross Barkley, operating behind Romelu Lukaku, fed Mirallas on a breakaway but the Belgian's effort was wasteful.

Martinez described Arsenal's attacking-play as "as good as it gets" in the run up to the fixture and late on in the opening period, Wenger's side began to showcase the guile which had earned them four consecutive wins.

Howard, seeking a fourth successive clean sheet, dived at the feet of Giroud to block after a neat Ramsey pass, before the Arsenal charges reversed roles.

This time Giroud dummied to release the Welshman, but Howard was again swift and brave to block at his feet.

The Gunners started the second period with the intensity their opponents had the first and Carzola headed tamely at Howard after a delightful interchange with Wilshere.

The intricate play was not lost on Martinez's side and Steven Pienaar collected Barkley's confident flick to warm the hands of Szczesny in Arsenal's goal.

Ramsey, whose eight goals make him the Premier League's most potent midfielder, was denied by Howard before the influential Barkley blasted straight at Szczesny at the other end.

After making four changes from the midweek win against Hull, Wenger highlighted the strength of his bench ahead of the match and the introduction of Theo Walcott, Tomas Rosicky and Mathieu Flamini backed up his confidence.

Flamini instantly shot wide, before Rosicky and Walcott combined to present Ozil with the opener.

The German, who now has four goals and six assists in his last 12 Premier League matches, volleyed high past Howard from six-yards, sparking relief amongst home supporters.

Their emotion was soon swung by Deulofeu, who had been on the field just five minutes when he collected a pass inside the area to unleash a shot past Szczesny.

Giroud's volley from 30 yards at the death almost offered a dramatic end to a pulsating final 10 minutes of play, but the ball cannoned back of the angle of post and crossbar to ensure the points were shared.

To see a gallery of images from Sunday's Premier League action go to the BBC Sport Facebook page.

"It was a good game and Everton played well. Overall it took us time to get into it and in the first 25 minutes they were stronger.

"After that we had three one against ones in the first half and that's the regret I have.

"We didn't take our chances very well and the other regret is that we gave the lead away with seven minutes to go. But credit to them, they always looked dangerous. In the end, we are disappointed to get caught but it's still a point."