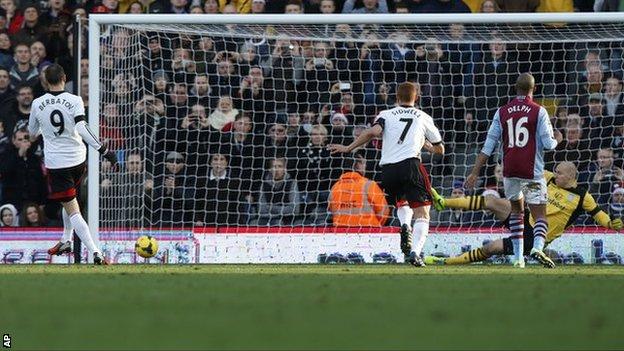 Fulham ended a run of seven consecutive defeats by beating Aston Villa to give head coach Rene Meulensteen his first win in charge of the team.

Steve Sidwell angled a shot in on the stretch to give the home side the lead.

The influential Dimitar Berbatov added a second from the penalty spot after Leandro Bacuna was adjudged to have fouled Alex Kacaniklic.

John Arne Riise's header hit the post for Fulham against a Villa side who might have had a late penalty.

Striker Gabriel Agbonlahor went down following a tackle from Aaron Hughes and Fulham would have been relieved referee Mike Dean saved them from a nervy finish by rejecting the away side's appeals.

Defeat ended Villa's five-game unbeaten run, while the Cottagers celebrated only their second home win of the season in the second game since Meulensteen succeeded Martin Jol last Sunday.

Fulham remain in the bottom three but are now only separated by goal difference from West Ham, who are one place above them.

The change of manager at Craven Cottage appears to have had an instant impact, with Fulham showing a marked improvement in their attitude and application under Meulensteen.

"Scott Parker provided the perspiration for Fulham, while Dimitar Berbatov was the inspiration. Aston Villa are beaten away from home for only the second time this season - it just wasn't their day."

The home side almost took an early lead but Villa keeper Brad Guzan acrobatically palmed a Berbatov header against the woodwork.

The visitors responded with the recalled Christian Benteke, who has gone nine league games without a goal, glancing a header wide and having a low 18-yard shot parried away by keeper Maarten Stekelenburg.

However, the Cottagers were the dominant side and Ashkan Dejagah, who appeared to be offside, stole in behind Villa's defence before Chris Herd recovered to get in a last-ditch tackle. The ball rebounded off Guzan to Kacaniklic and after his initial shot was blocked, his follow-up was cleared off the goal-line by Nathan Baker.

But Fulham's efforts eventually paid off when Berbatov knocked the ball down to Dejagah and he slipped a first-time ball though to Sidwell, who angled in a shot as he fell under pressure from Bacuna.

The second Fulham goal arrived via a more contentious route. Berbatov flicked the ball though to Kacaniklic and, after he went down as he was closed down from behind by Bacuna, Dean signalled a penalty. Berbatov waited for Guzan to dive to his left before nonchalantly putting the spot-kick in the opposite corner.

Riise had a chance to put the game beyond Villa's reach when Guzan missed a Giorgos Karagounis cross, but the left-back's header hit the outside of the post.

And although Villa had that strong late penalty claim turned down, they rarely threatened as Fulham earned their first win since 21 October.

To see a gallery of images from Sunday's Premier League action go to the BBC Sport Facebook page.

"We never deserved to win the game but I'm disappointed at some of the decisions. I thought their penalty wasn't one whereas ours when Gabriel Agbonlahor was brought down was a spot-kick.

"I thought referee Mike Dean's performance was poor. I still don't think we did enough to win the game.

"We never got going but couldn't fault the lads for effort. I'm honest enough to feel we didn't deserve to win."