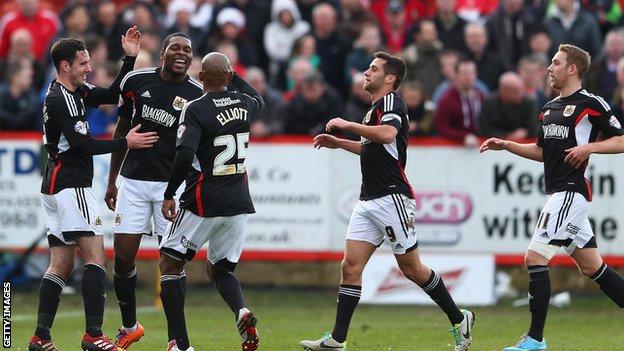 Steve Cotterill claimed victory in his first game as Bristol City manager as the League One side saw off non-league Tamworth in the FA Cup second round.

Dale Belford's Lambs, 20th in the Conference Premier, had their chances to equalise with the score at 1-0.

Andy Todd bundled in a consolation but the visitors held on for the win.

on Tuesday, and while his main ambition this season is to ensure City do not suffer a second consecutive relegation, he will be pleased to have overcome a brave Tamworth side in what looked a tricky FA Cup tie before kick-off.

The non-league outfit put in a brave and committed display, although they needed a combination of Tony Capaldi and Duane Courtney to keep out Aden Flint's early header.

There was a scare for the visitors when Todd's mazy run was only denied by a last-ditch tackle by Derrick Williams, before top scorer Emmanuel-Thomas netted his 15th goal of the campaign with the only moment of real quality in the first half.

Collecting the ball on half-way, the former Arsenal trainee raced forward unchallenged and fired into the top corner from 25 yards.

Scott Wagstaff missed the opportunity to double the advantage after the break, shooting wide from distance having been presented with an unguarded net after Cameron Belford's clearance was partially blocked.

The home side's best chance to equalise came when striker Justin Richards latched onto a long ball but he failed to find the target from close range with only Elliot Parish to beat.

And City skipper Baldock made Richards pay, latching onto an Emmanuel-Thomas flick-on and lifting over Belford for 2-0.

Todd's effort following a scramble in the six-yard box was awarded, despite television replays showing the ball did not fully cross the line, but Tamworth could not do enough in stoppage-time to force a replay.

"We knew it wasn't going to be a silky game. It was a very difficult game for us.

"I would have liked us to have played a bit more football. I don't know if the conditions were conducive but we didn't retain the ball enough.

"We're down the lower echelons of League One and we're not full of confidence, so that was a good win for us."