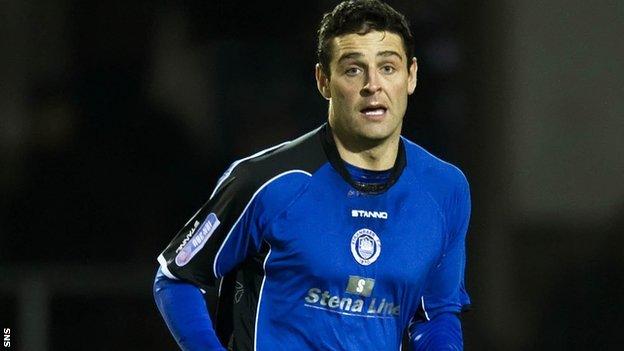 McKeown was one of more than 100 firefighters working through the night at The Clutha pub, before playing against Clyde.

"Obviously it was a bit of different build-up to a game," said McKeown.

"Last night was a bit traumatic - an hour [of sleep] is what I got."

He continued: "The emergency crews there did a great job."

Eight people are now confirmed to have died after a police helicopter crashed into the busy pub in Glasgow city centre.

I took a wee moment to reflect on last night. It took me a wee while to get into the game but I was glad I played.

A minute's silence was observed at all Scottish Cup matches in remembrance of those involved.

"I took a wee moment to reflect on last night to be honest," McKeown told BBC Scotland after Saturday's match.

"Obviously, thoughts go out to friends and relatives and stuff. I suppose it does put things into perspective - it's only a game of football, you know.

"I feel OK just now. Busy last night and an hour's sleep, which is not like me because I like my sleep.

"It took me a wee while to get into the game but I was glad I played. Basically just a bit of adrenaline and stuff got me through the game thankfully."

The match at Broadwood finished 1-1 and will go to a replay at Stair Park in Stranraer.

But defender McKeown said it was always his intention to play the game.

"There was no danger that I was going to not play," he added.

"I wanted, obviously, to help the boys out and get through to the last 16 of the cup.

"We've had a really good season so far and I think we were probably lucky to stay in the cup today. I thought Clyde were the better team."