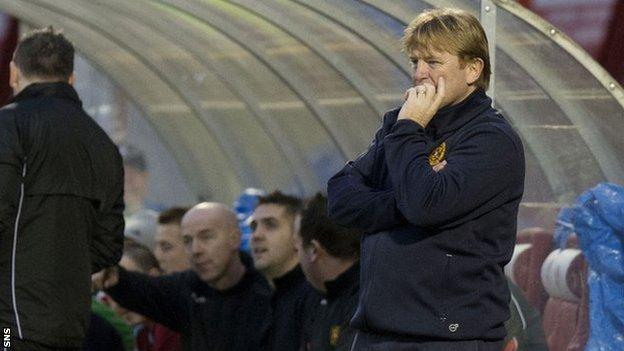 Gary Phillips' late goal for the League Two strugglers knocked the third-placed Premiership side out.

"It is probably one of the worst results in Motherwell's history in cup competitions," said the manager.

The match had been switched from Rovers' tiny Cliftonhill Stadium to nearby New Douglas Park in Hamilton but McCall was not prepared to blame the artificial pitch.

"There are no excuses for today," he told BBC Scotland. "I've been very fortunate in my football career, almost 34 years, and that's the first time I've been on the end of a shock like that.

"We're out the cup. A horrendous feeling.

"They happen in football, but it doesn't make it easy to take.

"It wasn't lack of desire or effort, it was just lack of ability and quality - the passing, the crossing, the attempts on goal.

"They defended really well and they scored with a sucker punch right at the end."

The Coatbridge side sit second bottom of Scotland's bottom tier while Motherwell are third in the Premiership after last week's 2-0 win at Kilmarnock.

"I can't get my head round how we can go from being so confident and playing so well last week to being so disappointing today," said McCall.

"I know it's hard to break down when they sit deep, but with the ability we had out on the park, we should have created a lot more.

"Right out of the blue, the boy swings his foot and it ends up in the bottom corner."

Motherwell must gather themselves quickly as they next face Premiership leaders Celtic.

"Time is a great healer," added McCall. "Everyone who goes over that white line on Friday night against Celtic has to be fully focused on bringing a bit of pride back to the club.

"You have to focus on the next game and that happens to be against Celtic, who are doing really well in the league at the moment.

"We've managed to beat Celtic in the last two games at Fir Park, so we want it to do it three on the trot."