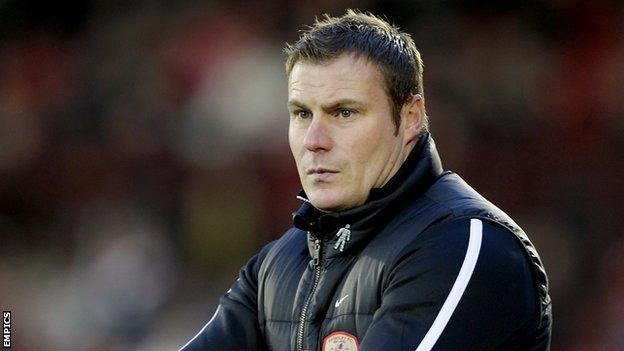 Barnsley have sacked manager David Flitcroft after less than a year in charge at Oakwell.

The Tykes lost 3-0 at home to Birmingham on Saturday and are bottom of the Championship, with the worst defensive record in the league.

Flitcroft was appointed in January this year following a spell in caretaker charge and helped Barnsley avoid relegation last season.

But Barnsley are now six points adrift of safety with 11 points from 17 games.

The duo will be in charge for Barnsley's trip to Brighton on Tuesday.

Flitcroft did not attend the post-match news conference after his side's comprehensive defeat against Birmingham, with a club statement released shortly afterwards confirming the 39-year-old had been "relieved of his position".

"The club would like to place on record their appreciation and thanks for what David, Martin and Guy have achieved," the statement said.

"There will be no further statements from the club until Wednesday 4 December 2013."

Flitcroft - whose playing career included spells at Chester, Rochdale and Bury - was assistant manager at Oakwell but was placed in temporary charge following the sacking of Keith Hill on 29 December last year.

He won the backing of the board to continue in the role, signing a rolling contract in May, after nine wins from 21 league matches helped them survive on the last day of the season.

But the 2013-14 season has been a huge struggle for Barnsley, with their last win coming against Middlesbrough on 19 October.