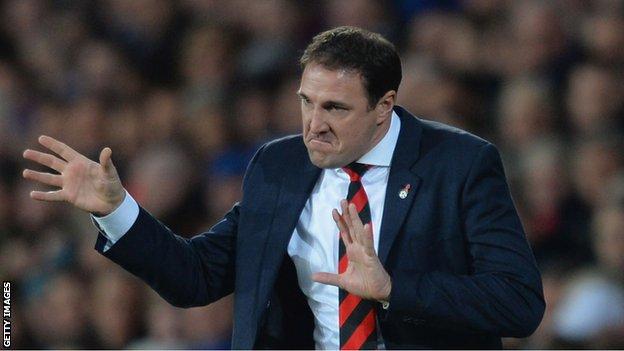 Former Bluebirds player Aaron Ramsey scored twice on his return to Cardiff as Arsenal moved seven points clear at the top of the Premier League.

But manager Mackay felt his players gave a good account of themselves against a "top team".

"I thought all through the team we played well but I thought second half we were very brave," he said.

And Mackay reserved special praise for Aaron Ramsey, who joined Arsenal from Cardiff in 2008, when just 17.

The Wales international did not celebrate his goals and acknowledged the warm applause by tapping both hands against his head - known by Cardiff supporters as the Ayatollah - following an impressive display.

"He's a very good young player - he's one of the best," said Mackay.

Cardiff trailed to Ramsey's 29th-minute header until the 86th minute when Arsenal twice caught them on the break to score through Mathieu Flamini and Ramsey again.

Before that, home striker Fraizer Campbell forced a superb save out of Wojciech Szczesny to deny Cardiff an equaliser - a key moment in the game, according to Mackay.

"We were on top and if the header goes in it goes to one each and that's the difference and the fine lines in the game," he said.

"I've got a whole host of players there who gave a good account of themselves against some of the best players."

The result left Cardiff one place above the relegation zone with a game against Stoke City on Wednesday up next.

Both sides are on 13 points and Mackay concedes there is a lot at stake.