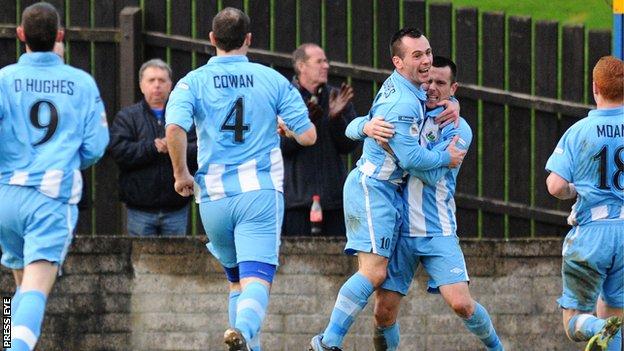 Warrenpoint moved off the bottom of the Premiership thanks to a 2-1 win over struggling Coleraine as they ended their temporary stay at Stangmore Park.

Stephen Hughes gave Town a 30th minute lead by heading in at the near-post from a Stephen McCabe corner.

Martin Haveron made it 2-0 three minutes with a superb 25-yard strike which hit a post before going in.

Shane Jennings pulled one back on 86 minutes from Aaron Canning's flick-on but the hosts held on for the victory.

Warrenpoint had to wait until their last 'home' game at Stangmore Park before securing a first win at the Dungannon venue.

It moves the Co Down men one point above new basement boys Ards.

"We're delighted to get a win at last at Stangmore and it's massive to move off the bottom," said Town manager Barry Gray.

"The boys were fantastic and it shows we can compete with and beat the leading teams in this league."

Warrenpoint keeper Jonathan Parr clawed away Howard Beverland's header and tipped over a Gareth Tommons shot as he denied the Bannsiders attack in the first half.

Town almost added to their tally in the second half but Wayne Drummond saved efforts from Daniel Hughes, Stephen Hughes and McCabe.

Coleraine have managed just one win in their last eight league outings and remain in 10th.