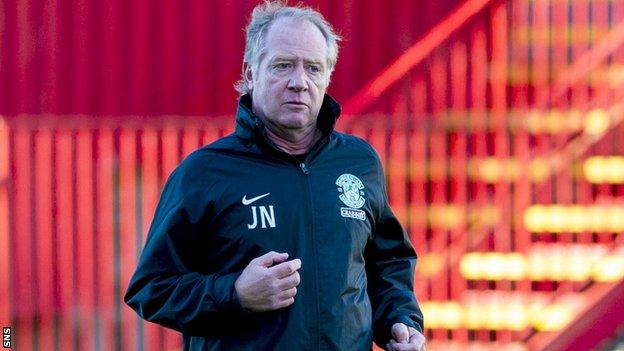 Jimmy Nicholl has agreed to become Cowdenbeath manager for a second time.

The Northern Irishman, who , was previously in charge at Central Park between 2010 and 2011.

Lee Makel, who was in temporary charge following , will be Nicholl's assistant at the Scottish Championship club.

"Welcome back to Cowdenbeath FC Jimmy Nicholl," said the club on their official website.

Cowden are currently second bottom of Scotland's second tier, two points above Morton and four behind Queen of the South.

Former Manchester United and Rangers defender Nicholl has spent most of his coaching career in Scotland, with two managerial spells at Raith Rovers and assistant manager roles with Dunfermline Athletic, Aberdeen and Kilmarnock.

He was placed in temporary charge of the Hibs first team after but left after Terry Butcher and Maurice Malpas were appointed as the Edinburgh club's new management team.

Nicholl took over from Danny Lennon at Cowdenbeath just after the club had been promoted to Division One.

However, Nicholl could not prevent the club being relegated to the Second Division before he left for Kilmarnock.