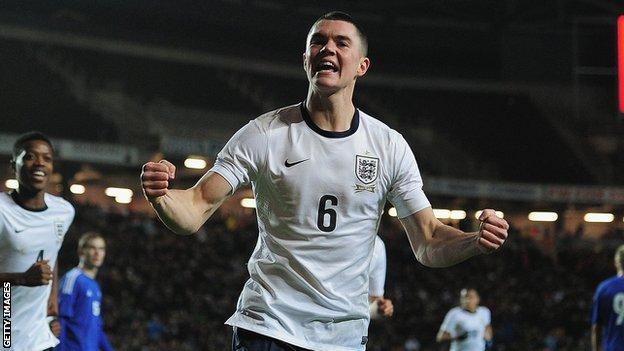 Michael Keane wants to use his loan spell at Derby to get into first-team contention at Manchester United.

The England Under-21 centre-back, 20, has not made a senior appearance for the Red Devils this season.

But having joined the Rams on a month's loan, he is hoping to catch the eye with consistent Championship displays.

"It's a big thing if you're not involved to go on loan, get your name out there and get people knowing who you are and how good you are," he said.

"I think where possible young players should always try to get out on loan if they're not getting regular games."

Stockport-born Keane, who spent a similar spell at Derby's rivals Leicester City last season, added: "I played a lot of football at Leicester last season and in the first six months back at United, not getting many chances, it has been a bit frustrating.

"David Moyes was happy for me to come because Derby's a massive club with a great training ground, manager and fans, so everything was pointing in the right direction to come here."

A number of clubs were understood to be chasing Keane, but he explained that the presence of former England boss Steve McClaren at Pride Park was crucial.

The current Derby manager enjoyed a successful spell as assistant to Sir Alex Ferguson at Old Trafford between 1999 and 2001.

"Steve McClaren was in touch and informed me he wanted to take me and I had to speak to David Moyes late at night after their Champions League game [against Bayer Leverkusen]," said Keane.

"The players at Manchester United who know him all said his training was really good and he would help improve me as a player.

"A lot of training in the Championship is different to Premier League standard, but I've heard Steve McClaren's is very similar, and that was a big factor."

Keane says he has settled into his new surroundings quickly, with fellow England Under-21 players Andre Wisdom and Will Hughes also currently in Derby's ranks.

He is eager to help the Rams extend their run of victories to three when they travel to the DW Stadium to face Wigan on Saturday, where he could line up against his brother Will who joined the Latics on Thursday.

"I've seen a few games and clips of Derby matches and it looks like they have been playing really well with some good football," said Keane.

(He) has a great attitude and, despite his age, brings a little bit of leadership

"I'll be able to contribute to that by playing out from the back and hopefully chipping in with a few goals, but my main thing is to defend well and keep clean sheets."

Derby boss McClaren is delighted to have won the race for Keane, who was Manchester United's Reserve Player of the Year in 2012.

He said: "I'm delighted. We're going into a busy period with eight games before the January transfer window opens again and it was important to get some cover.

"I've chased Michael for weeks trying to get him here and finally he's been allowed us to come and join us, for a month initially.

"He's got that experience already of the Championship with Leicester and going to the play-offs with them, so he's used to this league.

"He's a developing player who will add quality, has a great attitude and, despite his age, brings a little bit of leadership."