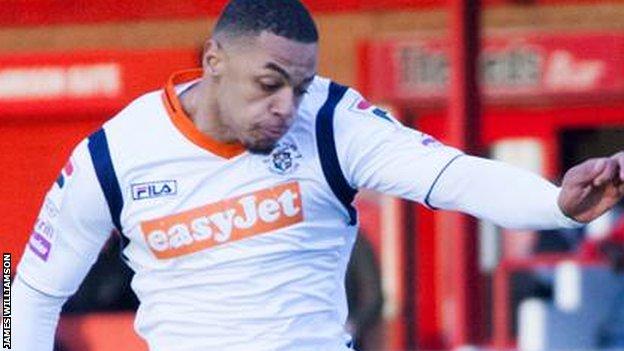 Andre Gray's brace helped Luton Town move to within a point of top spot with an impressive win at Alfreton Town.

Gray tapped in the opener from close range before Paul Benson coolly slotted home to double the visitors' lead.

Benson then turned provider for Gray to fire in his second before Luke Guttridge's neat finish made it 4-0 with only 18 minutes gone.

Alex Lawless completed the scoring with a second half strike that capped off a miserable day for the hosts.

Luton's victory sees them close the gap on leaders Cambridge, who have two games in hand on their closest challengers, to one point while Alfreton lie eighth.

"I thought we started well for 10 minutes, but then we came up against a side which were good everywhere they needed to be and we were poor everywhere you don't need to be.

"They were strong in the middle of the pitch. Steve McNulty holds it together at the back, the two central midfielders had too much power and pace for us, and [strikers] Andre Gray and Paul Benson - we just couldn't handle them.

"You have to hold your hands up - they're a much better team than we are. They're the best that we've seen this year and the best we've come up against by a long, long way."

"I think the combination of our play was above the level. I can only be delighted with what I saw.

"You can only do what you do yourself. We can't worry about the other teams. From my own point of view, Luton Town go out, play every week, give everything they've got, work as hard as they can, everyone does their bit, and I'm happy. The rest will take care of itself.

"I think the supporters are part of our team. The team isn't just the 11 on the pitch; the team is the people on the pitch, the substitutes, the supporters, the staff, the directors. The more people that are in and around our team, makes them stronger."