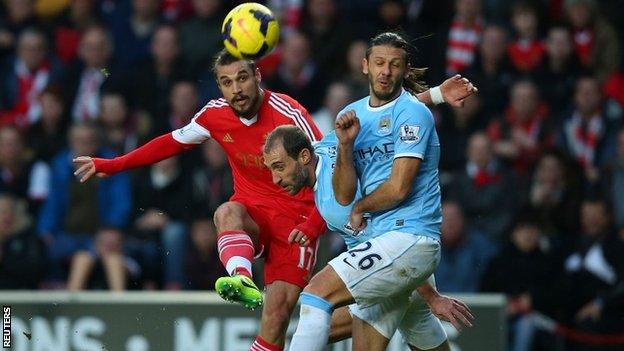 Sergio Aguero's early goal was the reward for an impressive City start as they looked to prove their travel troubles were over after the midweek win at West Bromwich Albion.

Southampton, however, demonstrated the energy and ability that has marked them out as one of the surprise teams of this Premier League season and Osvaldo provided the highlight of an entertaining game just before the interval.

He showed high-class control to open up a shooting opportunity on the corner of the area and provided a finish to match with a delicate lofted effort that left City keeper Costel Pantilimon with no chance.

City will regret a bad miss by Aguero when they led 1-0 - but no-one could deny a draw was the very least Saints deserved and for large portions of the second half they looked the more likely winners, with Pantilimon saving crucially from Jay Rodriguez.

Southampton manager Mauricio Pochettino, who was without a host of key players, looked disappointed with a point at the final whistle whereas opposite number Manuel Pellegrini will be frustrated his team, now fourth, did not cash in fully on Chelsea's shock loss at Stoke City.

Saints have been hit by injuries and had lost their previous three Premier League games - so it would have been understandable had their confidence dipped as Aguero gave City a 10th-minute lead.

Aleksandar Kolarov was the creator with a left-wing cross that was swept instinctively beyond Southampton keeper Paulo Gazzaniga, in for injured Artur Boruc and Kelvin Davis, by the left foot of Aguero.

With Yaya Toure controlling midfield, Saints struggled early on, but what unfolded for the rest of the first half was a testimony to the fine work done by Pochettino and this group of players in the early phase of this season.

They were fortunate the normally deadly Aguero was off target when he shot over from close range after being set up by Pablo Zabaleta but Saints were full value for their equaliser.

The home side's trademark pressing game put City under pressure and as a consequence they were able to take control.

Callum Chambers headed just wide from a wonderful Luke Shaw cross but City were powerless to prevent a moment inspiration from Osvaldo pulling Southampton level minutes before the break.

The striker, signed for £15m from Roma, showed dazzling footwork on the angle of the penalty area to fool City captain Vincent Kompany before curling his finish beyond the stretching Pantilimon into the far corner.

In an eventful opening to the second half, Gazzaniga did well to save low down from Aguero and Toure was inches wide - but it was Southampton who had the clearest opportunity.

Pantilimon saved at the feet of Rodriguez after he weaved his way through City's defence - and Osvaldo's composure deserted him as he lashed the rebound wildly over the top.

Since his early goal Aguero had not quite been able to get his radar right and another cross-shot flew across the face of goal after he had worked some space in the area.

Southampton were not daunted and they were the side pressing forward with intent when referee Anthony Taylor blew the final whistle.

"Overall the performance was amazing from my team.

"I think we have been on a negative run of results as of late but the thing about this team is it keeps believing.

"Overall, I am very happy with the team."

"It is a good point. I don't feel like we lost two points.

"In all the other games away I felt like we deserved more but here this was the result that both teams deserved.

"I always say that if you don't play well and you can't win, then at least don't lose. We didn't play well but we got a point."