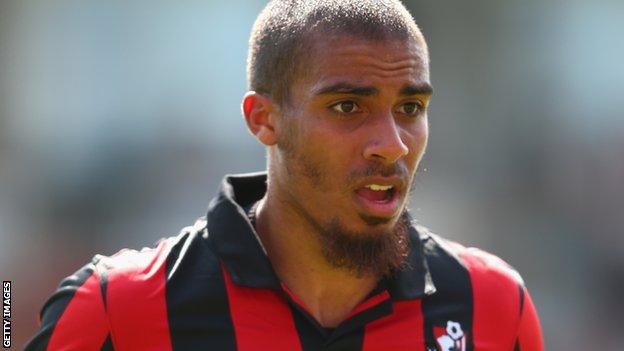 Grabban scored from a rebound after goalkeeper Alex McCarthy kept out Tommy Elphick's powerful header eight minutes before the break.

Ritchie grabbed the second for the Cherries soon after with a low drive.

Adam Le Fondre tapped in from close range in stoppage time, but it was not enough to deny Bournemouth.

Then there was two

Reading, who had lost just two of their previous 14 games, dominated the early stages of this encounter.

Billy Sharp saw a header cleared off the line, while Garath McCleary shot high and wide after cutting in from the right.

The visitors had barely been in the game but in the space of four minutes they stunned Reading.

After Elphick drew a save from McCarthy with a header following a Charlie Daniels free-kick, Grabban followed up to score.

And Ritchie put Bournemouth in command with the second four minutes later, working space for himself on the edge of the area before firing beyond McCarthy.

Brimming with confidence, Bournemouth had the better chances in the second half as Ritchie shot over and Simon Francis headed wide.

Reading managed to snatch a goal late on when Le Fondre finished inside the area after Royston Drenthe's shot had been blocked.

Reading manager Nigel Adkins: "We dominated Bournemouth for 30 or so minutes, we were by far the dominant force.

"But goals change the complexion of games and that's just what happened, and they were poor goals to give away.

"It's only our first defeat at home so we'll analyse it, take lessons from it and move on to the next game."

Bournemouth assistant manager Jason Tindall: "That has to be close to our best performance of the season.

"In recent weeks, we've performed well but something has always let us down. This time, we were good all round. All the lads were terrific.

"We must just stayed focused and keep believing in what we're doing."