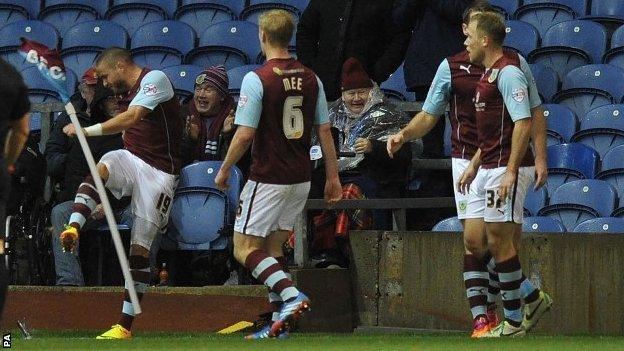 Michael Kightly struck his first goal of the season as Burnley beat Barnsley to take top spot in the Championship.

The former Wolves striker struck from inside the area in the second half, ensuring Barnsley stay bottom.

Burnley's Sam Vokes had an effort saved and fired over early on, before Paddy McCourt shot over for the visitors.

Barnsley, who still have Micky Mellon in caretaker charge, almost snatched a point but Tomasz Cywka's free-kick late on was saved by Tom Heaton.

Grateful for a good start

Burnley top the Championship and have the best goal difference in the division, despite winning just once in six matches

Burnley went into the game in third spot, despite being without a win in five matches.

Four draws in that period had seen their promotion push temporarily stutter, but Sean Dyche was able to recall top scorer Danny Ings from injury.

After winning at Brighton in midweek, just days after the sacking of David Flitcroft, Barnsley travelled west with fresh optimism, but they were soon under pressure.

Vokes latched onto skipper Jason Shackell's long ball to draw a save from Jack Butland, before going close again seconds later when his volley narrowly cleared the crossbar.

But the visitors grew into the game and went close in the 20th minute when striker Marcus Tudgay played a perfectly weighted through-ball to Cywka, who was denied by the legs of Heaton.

Ings fired acrobatically over early in the second period as the home side built up a sustained period of pressure which proved telling.

Former Barnsley loanee Kieran Trippier played a neat pass to the recalled Kightly, who drove confidently past Butland into the roof of the net from 16 yards. It was Kightly's first goal since scoring for Stoke in their Premier League defeat by Aston Villa in April.

Cywka cracked a free-kick from 35 yards late on which appeared destined for the top corner, only for Heaton to produce a smart fingertip save to ensure Burnley moved top, level on points with Queens Park Rangers and a point clear of Leicester City.

"I've read this week that we've been going through a mini-slump. Well, we've dropped from the top to third place, and then back to the top, I hardly see that as a crisis.

"It was a marvellous moment of quality that won the game for us. It was a fantastic goal from Michael.

"On our day we can match anyone in this division. We just needed to work out a way to win the second half, and we got there in the end."

"I've not been told anything by the board. I don't know whether I'll still be here tomorrow, never mind being in change for the Yeovil game next weekend.

"It's been a difficult period, but the players have shown that they are up for the fight and we had a right good go."