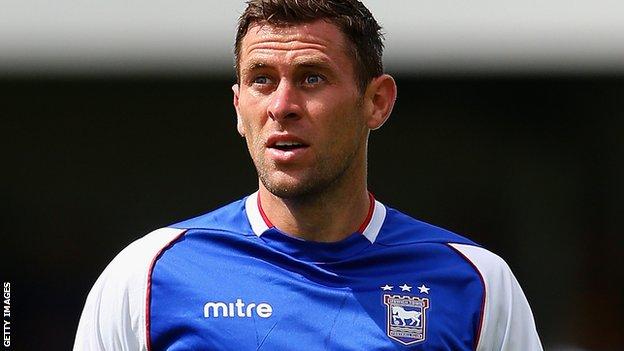 Daryl Murphy scored late on as Ipswich came from behind to beat Huddersfield.

James Vaughan missed a penalty but Huddersfield took the lead in the first half when Danny Ward finished from Adam Hammill's cross.

Ipswich equalised early in the second half courtesy of David McGoldrick's left-footed finish.

The hosts then secured all three points when Murphy headed in during the final minute to make it three wins from three for Ipswich.

They move up to ninth in the Championship with 29 points, two off the play-off places.

Huddersfield, meanwhile, are 11th with 26 points.

The visitors had arrived at Portman Road looking for their fourth successive win and it was a confident start by Mark Robins' men.

Oliver Norwood shot over before Ward forced Ipswich keeper Dean Gerken into a smart save.

Huddersfield should have been ahead midway through the first half when Christophe Berra brought down Vaughan inside the area, but the striker's spot kick was saved by Gerken.

However, 10 minutes before the break, they were ahead when Hammill broke to the by-line and crossed for Ward to finish.

Hammill then smashed a shot against the underside of the bar as Huddersfield pressed for a second, but Ipswich levelled soon after the restart when McGoldrick was picked out inside the area by Cole Skuse's fine ball and he made no mistake.

Huddersfield substitute Sean Scannell had a shot deflected wide but the game looked to be heading for a draw before Murphy headed in from Aaron Cresswell's free kick.

Ipswich manager Mick McCarthy: "I thought it was a great result and a fair one.

"It was a bit touch-and-go either way. I didn't think it was a penalty in the first half - so James Vaughan got his just desserts.

"But we showed a great response to their goal and we have a great spirit at the club. People care about their mates, the team and the club."

Huddersfield manager Mark Robins: "The Championship is full of diverse teams who offer different things, but we coped with what Ipswich offered.

"We could have been 3-0 up at half-time and it wouldn't have been embarrassing.

"But we lost because we gave the ball away, the referee gave them two chances at the free-kick and we didn't pick them up."