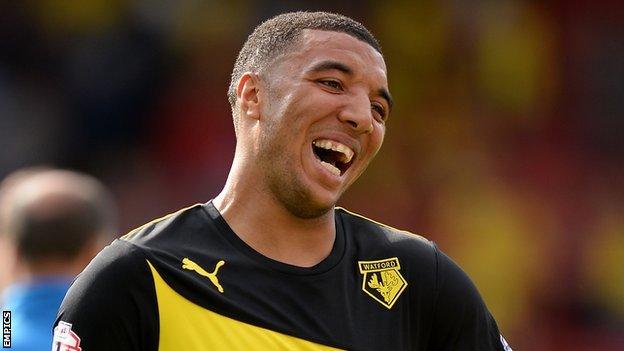 Watford wasted a two-goal lead and had Troy Deeney's late strike to thank for rescuing a point in a pulsating game against Leeds United.

The Hornets led through Deeney's 10-yard strike and a counter-attack goal by Christian Battocchio.

But Danny Pugh put the home side back in the game with a tidy finish from a tight angle and Matt Smith nodded in the equaliser from close range.

Ross McCormack ran through to slip in Leeds' third but Deeney earned a draw.

The result seemed a fair conclusion to an even match that was full of chances and open, attacking football.

Watford manager Gianfranco Zola had not seen his side win in seven matches before the daunting trip to Elland Road but they showed no signs of lacking confidence against a Leeds team who had won five consecutive home games.

The last three meetings between the teams had all ended in an away win. Watford have now drawn four consecutive away games.

Both sides had opportunities early on, with Smith denied by away keeper Jonathan Bond and Deeney going close with a header for Watford.

Watford went ahead when Lewis McGugan bundled into the box and Deeney was on hand to fire the ball home.

Their second goal came when a blistering breakaway saw Hector Bellerin race away and tee up Battocchio.

Smith spurned two great headed chances for the hosts but Leeds did reply when Pugh beat Bond from the tightest of angles from the left side of the six-yard box after McCormack's cross was half-cleared.

With the momentum behind them, Smith drew the home side level when Lee Peltier robbed Anya in midfield, released McCormack who set up all Smith for a simple close-range header.

The home pressure was relentless and Bond was forced to pull off several fine stops, notably to deny Rodolph Austin.

McCormack had a glancing header ruled out for offside but he was not to be denied for long.

The striker ran on to a long Murphy pass and slipped the ball past the advancing Bond for his 16th goal of the season and 10th in seven games.

But Watford earned their draw when Deeney reacted quickly to fire in from six yards after Kenny made an initial save from George Thorne.

"I have mixed emotions as it could have gone either way. It was such an open game and in a game like that, anything can happen.

"Even at 3-2 I felt we needed a fourth. We were unfortunate not to get it, but Watford are a good side who were nearly in the Premier League this season.

"We were 2-0 down and I am proud of the players. We were unfortunate not to win but I can't be too greedy.

"There may be an initial disappointment that we didn't win but we may well reflect on this as a good point."

"The first half was brilliant, the second... It was a great game, very entertaining and the people who have come here have had a lot of pleasure.

"I am happy about the result of course, a point here at Leeds is not a bad point. I am maybe disappointed that the second goal they scored was a clear foul and I have to say the referee was very good until then.

"In that moment I think he has spoiled the game and the third goal the throw was definitely for us. The mistakes upset me a little bit but at the end of the day I am delighted for a point.

"Even after that I say that Leeds deserve a point, they created a lot of chances and a draw is a fair result. But we had to show we were not going backwards against Leeds, especially in a stadium like this with a passionate crowd.

"We needed to show spirit and determination and I see a lot of encouraging things happening in my team right now."

Shots on Target
Home9
Away7