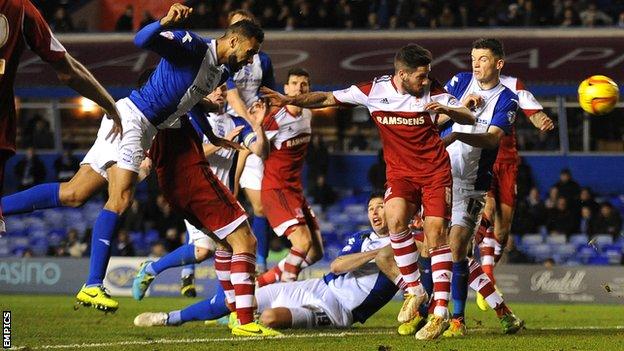 Kyle Bartley scored four minutes into stoppage time to rescue a point for Birmingham City and deny Middlesbrough a first away win since August.

Mustapha Carayol gave the visitors the lead with a shot from eight yards but Paul Caddis equalised from the penalty spot.

Daniel Ayala prodded the ball home to put Middlesbrough back in front with 10 minutes left.

The hosts salvaged a draw when Bartley headed home from Chris Burke's corner.

Birmingham were positive in their search for the opening goal with Dariusz Dudka and Jesse Lingard having early strikes. Dudka's effort bounced wide, while Lingard, shooting on the turn, saw his effort blocked by Jonathan Woodgate.

Middlesbrough, whose only away win came at Charlton on the second weekend of the season, seized a 22nd-minute lead when a cross from Marvin Emnes found its way to Carayol who fired his shot into the corner for the net.

After five successive away defeats the goal lifted the visitors and they began to play with clear determination against a Birmingham side lacking rhythm.

In an effort to inject more life into his attack, Birmingham boss Lee Clark sent on winger Burke in place of on-loan striker Aaron McLean, and it turned out to be an inspirational move.

Burke was instrumental in Birmingham getting back on level terms as he went down in the area under a challenge from Ben Gibson, and Caddis stepped up to convert the penalty.

Middlesbrough maintained a high tempo and it needed a reflex save from Randolph to keep out a powerful downward header by Kei Kamara.

The visitors when back in front in the 80th minute when Birmingham failed to clear their lines from a corner and defender Ayala poked the ball past Randolph.

Birmingham took their unbeaten run to five games when Bartley powered home a header from Burke's corner for his fifth goal of the season.

"Chris Burke changed the game for us after a disappointing first half only to concede another bad goal.

"We were then staring down the barrel but Kyle Bartley came up with the goods after going on as a late substitute.

"He has pestered me to allow him to go up front and he came up with the goods in terms of a great header from a set-piece.

"We are now unbeaten in five games. It is a good little run which shows we have solidarity."

"We are only four points above the relegation zone and not in a very comfortable position.

"When I arrived the most important thing was getting the points as it makes the players and myself more confident.

"It is not the first time it has occurred - but we have made mistakes late in the game.

"At half-time I told my players that we needed a second goal to win the game but Birmingham played very well in the second half to score two goals and earn a draw."