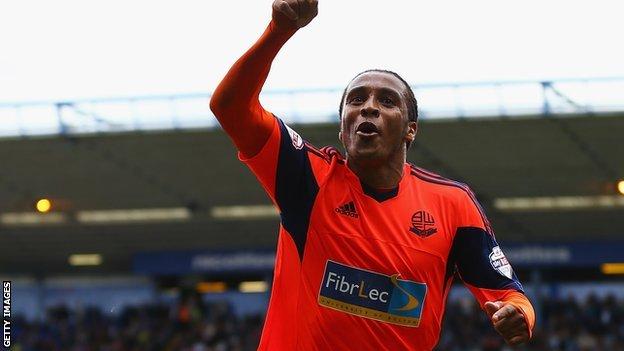 Joe Mason scored on his debut as Bolton beat Doncaster to secure only their second home win of the season.

The 22-year-old, on loan from Cardiff City, collected Andre Moritz's pass to fire a deflected effort on 33 minutes.

Moritz crashed the second in off the post minutes later, before Matt Mills saw his header chalked off for a push as Bolton dominated the second-half.

Substitute Neil Danns added the third to seal a biggest win of the season for Dougie Freedman's side.

After going eight games unbeaten, Wanderers went into the match off the back of 1-0 defeats at Middlesbrough and at home to Huddersfield.

Despite the set-backs, they controlled the majority of the match, though almost fell behind early on when Bongani Khumalo headed against the post.

The scare roused the home side, and after Darren Pratley had a strong penalty claim turned down, Mason scored his first goal since April.

His deflected strike proved a catalyst as Bolton seized complete control when Moritz's drilled strike rattled in off the inside of the post with former Chelsea goalkeeper Ross Turnbull helpless.

Paul Dickov's side have scored just six times on the road this season and failed to muster any meaningful pressure in the second period, leaving them without a win in six away from home.

Mills saw his header from Moritz's corner ruled out for pushing, before Danns replaced the recalled Chris Eagles to fire low into the bottom corner and move Bolton up to 15th.

"It's a credit to the lads and how they've stuck together. We worked as a whole team and we saw a Bolton team at their best today.

"We sent the fans home happy today as well and the fans and the players stuck together well and everything came off right for us in the end.

"I think the big challenge for me is getting some consistency. Once we start to do that then we'll move up this league quickly."

"When we hit the post, it was a defining moment in the game and if that had gone in then it could have been different.

"But I certainly don't feel that we should have won the game. Even at that point when we hit the post, Bolton were by far the better of the two teams.

"I felt that we just looked a little leggy today having played a lot of games in quick succession.