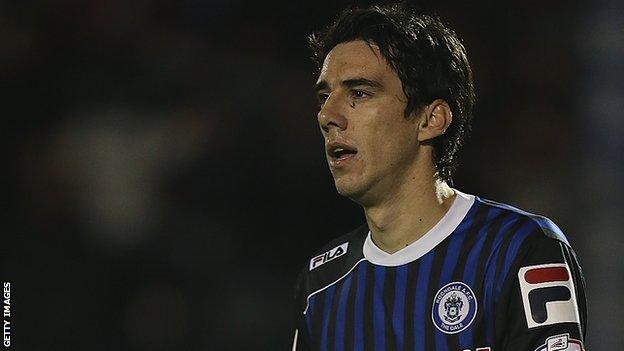 Peter Vincenti's winner at Rotherham put Rochdale into the FA Cup third round for the first time since 2005.

Lee Frecklington seized on a loose pass and slotted past Josh Lillis to put the League One side ahead early on.

Tidser received his second yellow card 16 minutes from time and Rochdale, who had improved in the second period, were able to make the advantage of an extra man count.

Home keeper Adam Collin kept out efforts from Scott Hogan, Jack O'Connell and Rose either side of the midfielder's dismissal.

Vincenti had been brought on as a first-half substitute for centre-back Oliver Lancashire as visiting manager Keith Hill changed formation following a poor start to the match.

"Obviously I'm upset. I don't think we got going in any stage of the match but despite that we got in front.

"In the second half we were trying to find a bit of play and struggling.

"The game-changer moment to go out of the cup was down to Michael Tidser getting sent off."

"Oliver [Lancashire] has been unbelievable for me, and he'll be a brilliant player for us, but I had to make the change early.

"Our game plan didn't work, so I had to change it. And I changed it so that we could win the game.

"This wasn't about the league - this was about me trying to earn money for the football club. I thought we were business-like and I made a business-like decision in the early stages."