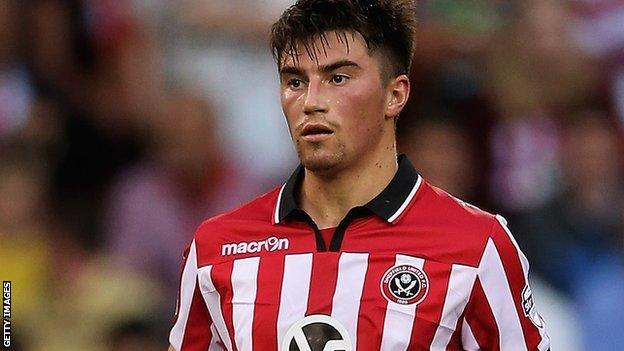 Loan signing Darryl Westlake can add an "extra dimension" to the Mansfield Town defence, according to manager Paul Cox.

The 22-year-old right-back is poised to make his Stags debut against Morecambe on Saturday after joining from Sheffield United until 5 January.

With the transfer window closing, I wanted to make sure that we weren't left short in defensive areas

Westlake is set to replace Ritchie Sutton, who is ruled out for six weeks with a thigh injury.

"First and foremost he's a good defender, particularly in one-on-one situations, but he also offers a lot going forward.

"When you've played at a higher level as he has, then dropping down to League Two, he can add that extra dimension and bit of quality."

Westlake has made 10 appearances for Sheffield United in League One this season, most recently in a 0-0 draw at Peterborough last month, and previously played 78 times at Walsall.

Cox added: "With the transfer window closing, I wanted to make sure that we weren't left short in defensive areas as Lee Beevers was my only other recognised right-back.

"Both Darryl and Lee are versatile and can play in a number of positions - in fact they were together at Walsall - so that's good to know going into a busy period for us."

Meanwhile, Cox expects that Lee Stevenson, injured along with Sutton in Tuesday night's 1-0 defeat at Burton, will be out for about a week with an ankle problem.