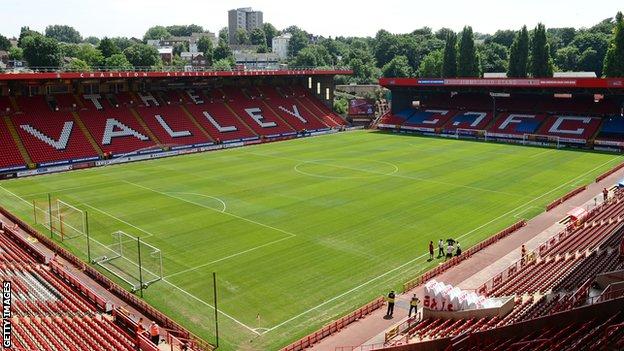 Charlton Athletic fans have succeeded in their attempt to have The Valley listed as an Asset of Community Value.

The application by the Charlton Athletic Supporters' Trust was approved by Greenwich Council, and means the group must be notified if the ground is to be sold.

"An ACV recognises how important The Valley is to the local community," CAS Trust chairman Barnie Razzell said.

"It is our hope that we will not ever have to use the legislation."

What is an Asset of Community Value (ACV) and how does a listing work?

He added: "Fans will now have a right in law to participate in any discussion about the future of football at The Valley."

The ability to list buildings or land as an asset of community value was enabled by the Localism Act in 2011.

Charlton moved to The Valley in 1919 and it was their home until 1985 when, following financial struggles, the ground was closed after the 2-0 win over Stoke City on 21 September.

The Addicks moved to Selhurst Park to groundshare with Crystal Palace, and The Valley fell into a state of disrepair.

Charlton supporters formed a political party in order to campaign against Greenwich Council's decision in March 1989 to reject planning permission to rebuild the ground, and a revised scheme was accepted in April 1991.

The Valley was not ready for the start of the 1991-92 season and Charlton moved to play their home games at West Ham United's Upton Park.

However the Floyd Road stadium was eventually re-opened on 5 December 1992 when the Addicks beat Portsmouth 1-0, with Colin Walsh scoring the only goal of the game.

"The fans, the club and the council all agree on the importance of The Valley," Razzell added.

"In football as in life, nothing is forever but this great news means that we, the fans, can be part of any discussion about the future of Charlton Athletic."