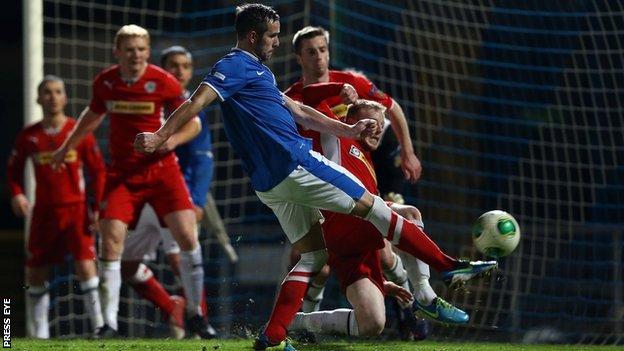 Linfield manager David Jeffrey has described Saturday's Premiership clash with Cliftonville at Solitude as a "mouthwatering clash" and a "big test".

The Reds are unbeaten in seven matches while league leaders Linfield have lost just one of their last 13 matches.

Champions Cliftonville welcome back top scorer Joe Gormley after suspension, while Tomas Cosgrove is available again after recovering from an ankle injury.

Peter Thompson and Niall Quinn remain sidelined for the Blues.

Cliftonville lie seven points behind Linfield in the table and are without injured quartet George McMullan, Stephen Garrett, Ciaran Caldwell and Chris Curran.

"It won't end our campaign if we don't win but we've been playing well in recent weeks and results have been reasonably good," said Reds manager Tommy Breslin.

"Other teams have been out to frustrate us and we've had a few injuries and suspensions, but there's plenty of time to make up for lost ground," he added.

Ballymena have won their last two Premiership games, having lost the previous three, and would move above Ballinamallard United in the table if they defeat the Fermanagh side on Saturday.

"We've been mixing it up a bit, not just playing one brand of football," outlined United boss Glenn Ferguson.

Sportsound focuses on the big Irish Premiership match between Cliftonville and Linfield, with Michael McNamee presenting live from Solitude, in the company of Marty Quinn and Philip Mitchell.

Joel Taggart and Liam Beckett provide commentary on the clash between the champions and the league leaders.

The programme will have reports from the day's other three games, plus news of the rest of the day's sport.

"Allan Jenkins has been doing a great job in a striking role and we've been scoring goals from different parts of the pitch, but that won't always be the case, so I've asked our forwards to watch and learn from what he is doing," added the former Northern Ireland international.

Ferguson has Michael Ruddy available after serving a ban, while fellow left-back Stephen McBride could return next week after a knee injury.

Ex-Lisburn Distillery striker Gary Liggett is back in the squad after a bout of illness.

The Showgrounds has not been a happy hunting ground for Whitey Anderson's men on recent visits, and they are without goalkeeper Fergal Murphy, who is still out after injuring ankle ligaments.

Mark McConkey is hoping to recover from a foot problem in time to figure against the Braidmen, while Jason McCartney returns from suspension and Cathal Beacom should be fit after a groin injury.

Coleraine hope to end a run of three consecutive league defeats when they travel to Stangmore Park to take on Warrenpoint Town.

"We are fighting for our lives and every point we can pick up at this point in time," admitted Bannsiders boss Oran Kearney.

"We are going through a tough spell but it's all about showing character to try and drag ourselves through this difficult period.

"I don't want the players to feel pressure though. They should enjoy their football and the only way to do that is to work hard and win games."

Striker Gary Browne faces a fitness test on a shin injury while Ruairi Harkin is nearing a return following a hip problem.

Midfielder Stephen Lowry underwent knee surgery this week and will not be back until late January.

Basement battlers Warrenpoint have Stephen Moan back after suspension, but midfielder Shaun Parr must sit out an automatic one-game ban as a result of his dismissal last weekend.

Crusaders, who welcome back Timmy Adamson after a two-game suspension, hope to extend their unbeaten run of 20 games in all competitions when they take on Ards.

Despite the Crues' formidable recent record, Ards manager Niall Currie says playing matches like this is "exactly what we want do and where we want to be".

"We want this club to stay in the top flight for many years but we have to stop shipping goals. We are scoring plenty, but we have to cut out the individual errors," warned Currie.