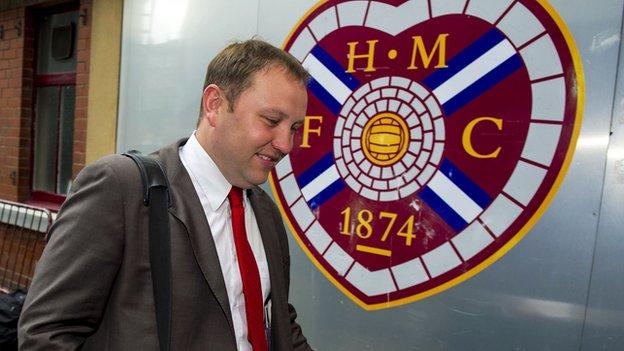 A company voluntary arrangement to take Hearts out of administration has been approved on condition of the purchase of the club's majority shareholding.

Fans' group Foundation of Hearts (FoH) offered £2.5m towards debts of around £30m but

That is when UBIG is due to hold its own creditors meeting.

UBIG abstained from the CVA vote on Friday morning, but 87% of those taking part did back the FoH offer.

A meeting of shareholders also approved the CVA offer later on Friday, but Hearts administrator Bryan Jackson revealed that it could be March or even April before the club can exit administration.

However, FoH chairman Ian Murray MP said: "We are pleased at the outcome of today's meetings.

"It is yet another step towards the road to getting the club out of administration and back to financial health.

"The process of a CVA is extremely difficult and today is merely the beginning of the next part of the process.

"We are full of respect and admiration for the creditors who have been involved in this process.

"Today, I'd like to thank our supporters - without them it would not have been possible to get this far."

Hearts entered administration in June and started season 2013-14 with a 15-point deduction. Gary Locke's side currently sit 12 points adrift at the bottom of the Scottish Premiership.

FoH was named as preferred bidder for the club by administrator BDO in August.

Most of Hearts' debt is due to Lithuania-based financial institutions UBIG and Ukio Bankas, which are also the club's two main shareholders.

Both UBIG and Ukio Bankas are in the process of being liquidated and there were no representatives from Lithuania in attendance at Friday's meeting of Hearts creditors.

"Whilst the journey is not over yet and there is much work to be done, we can move forward with a degree of optimism that Heart of Midlothian can have a future we can be very proud of," added Murray.