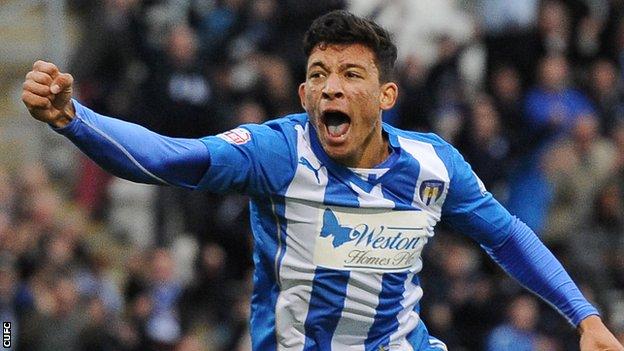 Colchester United teenager Macauley Bonne has said scoring his first goal for the club on his 18th birthday was the best day of his life.

The academy striker netted the only goal of the game last month and has gone on to score two more times.

"It was probably one of the best days of my life. I couldn't have asked for a better day," he told BBC Essex.

"I wasn't expecting it all to happen this quick."

Three in six for Bonne

Bonne only made his U's debut on 22 October and scored the winner against promotion-chasers Posh just four days later, in his first senior appearance at the Weston Homes Community Stadium.

He has since been on target in an FA Cup loss to Sheffield United and this week's 3-1 victory over MK Dons, taking his record to three goals from six games.

It has been a swift and effective transition from youth football for a man who was prolific for Colchester's Under-18s and Under-21s.

"Everything is completely different. I think I'm adapting slowly," he said.

"You can't take more than three touches or you're going to get lamped, it's as simple as that."

And, despite mixing it with the senior players, Bonne has been receiving support from his youth team-mates.

He said: "One of them, I won't name names, when I scored against Peterborough, he started tearing up. They went nuts for me."

U's boss Joe Dunne has said Bonne will continue to be in his first-team plans, but is wary of protecting the youngster during tougher times.

"We just want him to score goals when he plays," he said.

"A young player who has got a bit of attention when he's doing well is always good, but what we have to manage is when it doesn't go well."