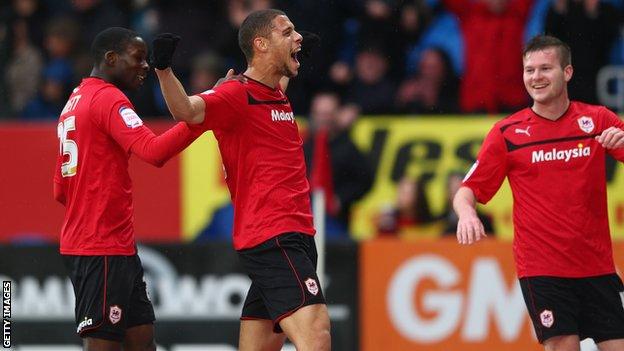 Gestede, 25, has appeared in just three Premier League matches for the Welsh club, all as a substitute.

Benin international Gestede will stay at Rovers until January, when he could make a permanent move to Ewood Park.

"I've not had much chance to play [at Cardiff] but it's not a problem," he told BBC Radio Lancashire.

"The team have done well for a team that have just been promoted. It's the manager's choice. I've done my best."

Malky Mackay's side, who won the Championship title last term, are 15th in the top flight and have already registered impressive wins against Manchester City, Fulham and Welsh rivals Swansea.

And Gestede has been unable to dislodge Fraizer Campbell or Peter Odemwingie from the starting line-up.

"I moved to Blackburn to play football and be on the pitch," he continued. "If the manager puts me on the bench because another player is doing well, it's not a problem. I'll give my best in training to try to get my place in the team."

Despite still being at a relatively early stage of his career, Gestede - who could make his Blackburn debut against Leeds on Saturday - is already preparing for life after football.

He has set up three companies alongside his brother and says it is important to have plans in place for the future.

"Football careers are very short and after that you've got another life," he added. "You need to prepare for this.