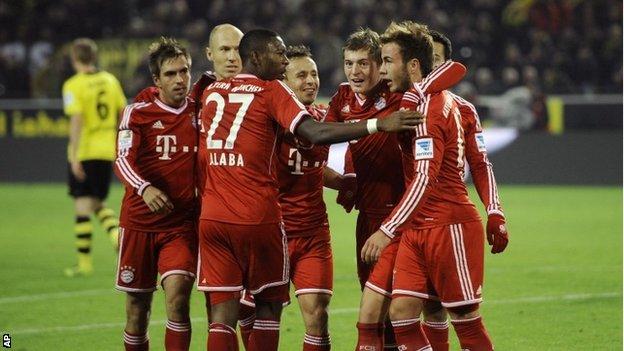 Bayern Munich look to extend their four-point lead over Bayer Leverkusen at the top as the Bundesliga's top three are in action on Saturday at 14:30 GMT.

Unbeaten Bayern are at home to bottom side Eintracht Braunschweig on the back of winning a record 10th Champions League match in a row, as they beat CSKA Moscow 3-1 in Russia on Wednesday.

However Pep Guardiola's side will be without 30-year-old club captain Philipp Lahm, who pulled a hamstring during the CSKA game. The Germany international will miss their next two games.

Winger Franck Ribery remains out with a cracked rib.

Second-placed Bayer Leverkusen come into their home match with second-from-bottom Nuremberg, who have not won a game this season, on the back of a 5-0 home loss to Manchester United.

Sami Hyypia's club have won 10 of their 13 Bundesliga matches so far this season.

Borussia Dortmund are seven points behind Bayern after losing 3-0 to their arch-rivals last Saturday.

Jurgen Klopp's side, who beat Napoli 3-1 on Tuesday, are likely to still be without their first-choice back four.

Neven Subotic, Mats Hummels and left-back Marcel Schmelzer are definitely injured while Lukasz Piszczek is unlikely to start. The right-back had a hip operation after the Champions League final in May and only returned as a late substitute against Bayern.

"The question is not, 'What is possible?' but 'What is reasonable?' He needs a few more training sessions to get back to the player he was," Klopp told the club website.