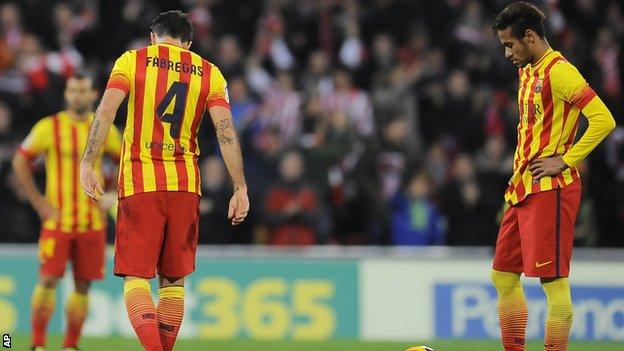 The Spain international slotted in the only goal of the game from Markel Susaeta's cross 20 minutes from time, as the Basque team moved up to fourth.

Barcelona, who also lost to Ajax in midweek and were without the injured Lionel Messi, created few chances.

The best fell to Neymar, whose curling shot was tipped over by Gorka Iraizoz.

The Brazil forward, who cost Barcelona £48.6m in the summer, had another golden chance to score for the Spanish champions, but slipped as he tried to convert Cesc Fabregas's excellent through-ball.

Barcelona were beaten 2-1 by Ajax in the Champions League on Tuesday, but Barcelona midfielder Sergio Busquets was not concerned by his side's form.

He said: "Two losses have come in a row, but we have to keep going forward.

"Sure we made mistakes, but we also did things well. We played a good, wide-open game against a great rival that knew how to pressure us."

Barcelona remain top of the league on goal difference, level on points with Atletico Madrid, who beat Elche 2-0 on Saturday.

Fierce rivals Real Madrid are only three points behind after Gareth Bale's hat-trick helped them to a 4-0 victory over Real Valladolid.

Barcelona's previous defeat in the league came against Real in March this year.