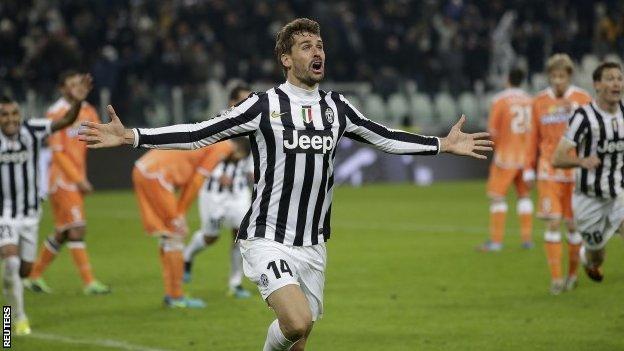 Fernando Llorente headed a winner in stoppage time against Udinese to send Juventus three points clear at the top of the Serie A.

Juve created few clear-cut chances during the match until the final 10 minutes when Fabio Quagliarella forced a save from Zeljko Brkic before Alan cleared Llorente's header off the line.

Llorente made no mistake with his next effort when he nodded in Stephan Lichtsteiner's attempted shot.

Juve next face Bologna on 6 December.

The win was marred slightly by an injury to Andrea Pirlo, who went off early in the game after taking a blow to his knee.

"We hope it's not twisted and is just a knock," said Juventus manager Antonio Conte.

"I want to be optimistic, he's a champion and will look to return immediately."

Earlier, second-placed Roma, who won their opening 10 league games, were held to a 1-1 draw by Atalanta.

Roma were behind early in the second half when Davide Brivio's low free-kick beat keeper Morgan De Sanctis. But the capital club rescued a point when Netherlands midfielder Kevin Strootman tapped in from six yards in stoppage time.

They have 34 points - three fewer that Juve.

Inter Milan's new owner Erick Thohir watched his side's "worst game of the season" as they were held to a 1-1 draw by Sampdoria.

Fredy Guarin gave Inter an 18th-minute lead, but were denied the victory by Renan, who scored in the 89th minute.

"In terms of the way I see football, it's the worst game my team has played this season," said Inter coach Walter Mazzarri.

"We've always taken the game to our opponents and attacked them - today though we were a bit off-colour."