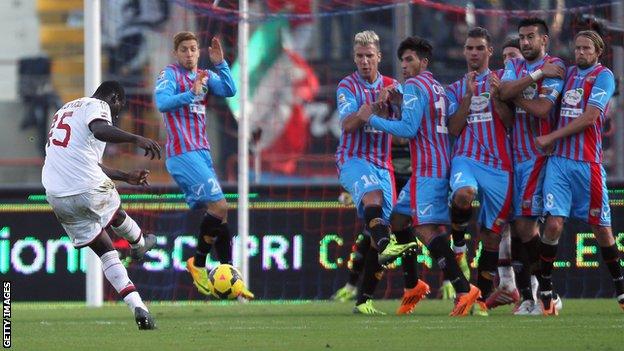 Mario Balotelli scored his first Serie A goal in two months as AC Milan ended a run of five league games without a win by beating 10-man Catania.

The home side took an early lead through a deflected Lucas Castro effort but Riccardo Montolivo quickly volleyed in Milan's equaliser.

Balotelli put his side ahead with a low free-kick before Panagiotis Tachtsidis was sent off for Catania.

Kaka made the points safe late on, finishing from a tight angle.

The win ensured Milan finished a turbulent weekend on a high.

Milan chief executive Adriano Galliani announced his intention to retire on Friday after 27 years at the club.

However, club president Silvio Berlusconi said on Saturday that Galliani would remain in his post following a restructuring.

The victory, only Milan's fourth of the season, means they move up to ninth with 17 points.