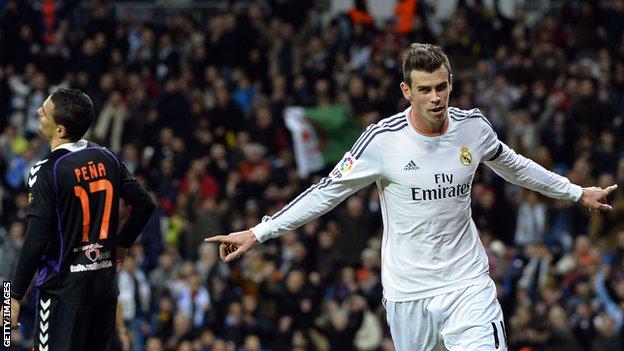 The 24-year-old did so in style as he nodded in the opener before setting up Karim Benzema to head in a second.

Bale sidefooted in Real's third before finishing from eight yards late on.

The Wales international takes his tally to nine goals in 13 appearances for Real since his £85m move from Tottenham in September.

"Gareth Bale has fully adapted to the team. He has a lot of confidence and is very important for us," said coach Carlo Ancelotti.

"I don't know if this was our best match so far, but we have to continue playing like this."

Gareth Bale has scored seven goals in this La Liga season, one more than Mesut Ozil managed in his first campaign with Real Madrid

Ronaldo's goalscoring exploits have dominated the headlines this season. The Portuguese forward has scored 32 goals in 22 appearances this season, but Real were denied his attacking threat for the visit of Valladolid as he sat out the game with a slight hamstring injury.

As a result a lot of the pre-match focus was on whether Bale would be able to step up in Ronaldo's absence.

Despite seeing plenty of the ball, Real took a little while to find their rhythm and although Angel Di Maria hit the crossbar, they did not force visiting keeper Diego Marino into a telling save during the opening exchanges.

However, there was little he could do when Bale opened the scoring just after the half hour mark. Di Maria forced Marino to push his stinging shot away, but he could only send the ball as far as Bale, who nodded in to the unguarded net.

Moments later Real scored a second with Bale this time providing the assist. He floated a fine ball to Benzema inside the box and the French forward powered a header beyond Marino.

Real Valladolid, 17th in La Liga with 12 points, offered little in the way of attacking threat but they had half a chance early in the second half when Carlos Pena drilled a low shot wide of Diego Lopez's goal.

The visitors went a little closer as Zakarya Bergdich forced Lopez into a low save, but any thoughts that Valladolid were getting back into the game were ended when Bale scored his second of the game.

Marcelo squared a low cross from the left that Jesus Rueda tried to stab away, but he only succeeded in sending the ball to the feet of Bale, who sidefooted in from 10 yards.

From then on the Valladolid players seemed resigned to defeat, with Real embarking on numerous attacks in pursuit of a fourth.

Alvaro Morata danced his way across the edge of the area before clipping a shot into the hands of Marino, who then pushed behind a low Isco effort.

But a fourth duly arrived in the closing stages, with Bale positioning himself perfectly in the box to be able to stab in Marcelo's cut back from close range.