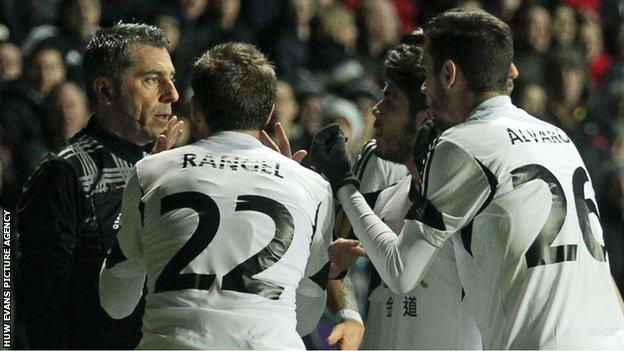 Manager Michael Laudrup believes Swansea had a good goal ruled out in their 1-0 Europa League defeat against Valencia at the Liberty Stadium.

But the goal was ruled out for offside, with Laudrup unhappy with the decision.

"When Shelvey is going he keeps his flag down, it is when Alvaro scores he puts it up, but he is a yard onside," said the Dane.

Although television replays seemed to back Laudrup's contention, he declined to be drawn into full-blown criticism of the officials.

"I can't really talk about referees," he said.

A draw would have seen Swansea qualify for the knockout stages of the competition with a game to spare.

As it is Daniel Parejo's first-half strike means Swansea need a point from their final Pool A game at St Gallen on 12 December to be sure of qualification.

But they could still reach the last 32 even if they lose in Switzerland, provided Kuban Krasnodar do not beat Valencia in their final game.

Laudrup insisted he was not concerned that his side's bid for the knockout stages has gone down to the last game, having opened this Group A campaign with a famous 3-0 win over Valencia at the Mestalla.

"I know in European competition you have to play until the last game and I knew from the beginning that it would be very difficult," he said.

"Today we saw a Kuban side who everyone thought was the weakest in the group win 4-0 at home against St Gallen.

"It is not easy and you have to play until the last game."

Swansea finished the game with 10 men after using their three substitutes before defender Angel Rangel picked up a calf injury near the end of the match.

However, a hamstring injury to Wilfried Bony is a much bigger concern for the Swans, potentially ruling the striker out for "several weeks", according to Laudrup.