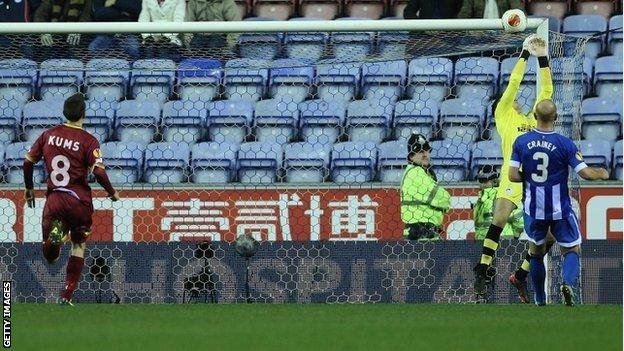 The Latics had led through Leon Barnett's volley before Nicholls, 21, failed to keep out a strong, but relatively routine shot from Thorgan Hazard before half-time.

"The young lad made a mistake, he will play on Sunday again," said Coyle.

"He will be stronger for it and will go on to have a great career."

Nicholls came through the youth system at Wigan and was making only his eighth appearance for the club, with first-choice goalkeeper Scott Carson injured.

"He has been terrific before now," added Coyle. "We will pick up and go again.

"If goalkeepers make mistakes it invariably results in a goal. I missed chances as a striker but they are always forgotten.

"He has a big career ahead of him and that is what he needs to concentrate on."

Wigan are making their first-ever appearance in a European competition and could have sealed progression to the last 32 with a win.

However, the loss means they drop to third in Group D, with Zulte leapfrogging them into second.

Wigan will need to win at Maribor in their final group and hope leaders Rubin Kazan beat Zulte on 12 December.

"We are disappointed of course we are because to qualify tonight would be fantastic for the club," said Coyle.

"It is nice to decide your own fate but all we can do is continue to do our best."