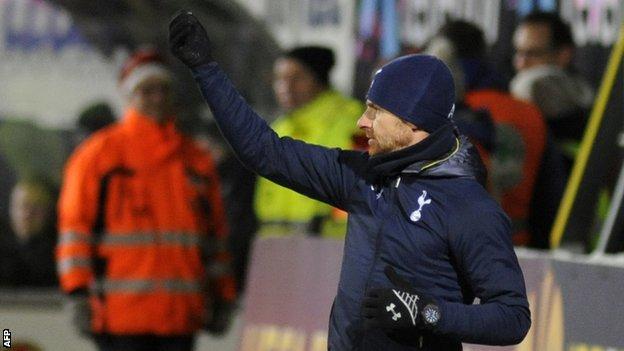 Andre Villas-Boas says Tottenham's 2-0 Europa League win over Tromso provided his side with a much-needed boost.

Spurs lost 6-0 at Manchester City on Sunday and host Manchester United this weekend - a game Villas-Boas believes Thursday's victory prepares them for.

"I am very happy for the players to have bounced back from the defeat against Man City," said Villas-Boas.

"To prepare for that game [United], it was important to get back to winning ways tonight."

He added: "We did it in a fashion where we looked solid and created lots of chances. I am extremely happy with the performance and result."

Spurs are currently ninth in the league with 20 points from 12 games - a point behind United - and welcome David Moyes' side to White Hart Lane on Sunday with Villas-Boas' job reportedly under pressure.

They sold last season's top scorer Gareth Bale to Real Madrid for £85m but had been expected to be among the challengers for the title having brought highly rated players - forwards Erik Lamela and Roberto Soldado, Brazil international Paulinho and midfielder Christian Eriksen - to the club.

But the north London outfit have already lost four times and only scored nine goals so far in the league this season - the fewest of any of the top 12 clubs. In contrast, United have scored 20 and are unbeaten in all competitions since 28 September.

The champions face Tottenham off the back of a 5-0 win over Bundesliga high-flyers Bayer Leverkusen on Wednesday.

"I watched the game last night [Wednesday] - it was a good performance but it will have no bearing on Sunday," added Villas-Boas.

"They are on a good run that changed their fortunes. We don't expect an easy match, but it will be a completely different story [for United] on Sunday.

"I'm not being disrespectful, but it will be a different game in different conditions and our players will be mentally ready."

Villas-Boas also made light of the suggestion he should be replaced at Tottenham by ex-United manager Ferguson after ex-chairman Lord Sugar said he would like to see the Scot take charge.

"I think it is pretty fair [to say Ferguson could do better]," the 36-year-old manager said with a smile.

"With the record he has, he would be a pretty good manager at any club."

Germany midfielder Lewis Holtby, who came on as a substitute against Tromso, said: "We needed some confidence from somewhere. If it was a long week [between games] then it would have been in everyone's heads.

"It wasn't the best game, but after the nightmare on Sunday it was good to get a result and a little confidence."