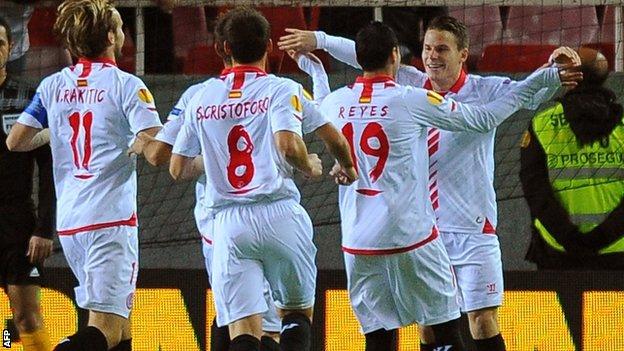 La Liga clubs Sevilla and Real Betis both qualified for the last 32 of the Europa League despite neither winning their matchday-five fixtures.

Kevin Gameiro's early goal gave Sevilla the lead fellow Group H side Estoril, who then equalised in the final minute through Ruben Fernandes.

Betis also progressed despite losing 1-0 away to Lyon, who will join their Group I rivals in the knockout stages.

Eintracht Frankfurt will finish first in Group F after a 1-0 win in Bordeaux.

In Group J, Lazio beat Legia Warsaw 2-0 in the Polish capital to ensure their own progress into the knockout phase.

Goals from Brayan Perea and Felipe Anderson either side of half-time were enough to give the Italian side victory over their hosts, who are without a goal or a point in the Europa League this season.