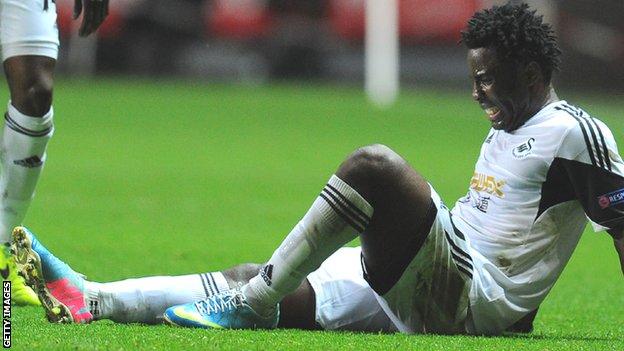 The Swans top-scorer, 24, was taken off after suffering a hamstring injury in the 1-0 Europa League defeat by Valencia on Thursday.

"It could be quite a serious one," said Laudrup.

"We will have to wait two or three days until we get a scan, but unfortunately I think we are talking several weeks at least."

Swansea have confirmed Bony and defender Angel Rangel will have scans early next week.

Right-back Angel Rangel picked up a calf problem during the match but manager Michael Laudrup does not believe his injury is as serious as Bony's.

The defeat against Valencia leaves Swansea needing a point from their final Group A game away to St Gallen to be sure of qualification for the knockout stages.

Bony, who has scored 10 goals this season, pulled up just before half-time against Valencia after chasing a long pass from Jonjo Shelvey.

With last season's top-scorer Michu already sidelined with an ankle injury, it leaves Laudrup with a shortage of firepower in the lead-up to the busy Christmas period.

On-loan Getafe striker Alvaro Vasquez was brought on in place of the Ivorian and played up front for the remainder of the match.

Laudrup added: "It is a blow but that's how it is. You have to accept it and when you have a lot of games this is a possibility.

"Let's see what happens with Michu in the next week or so."