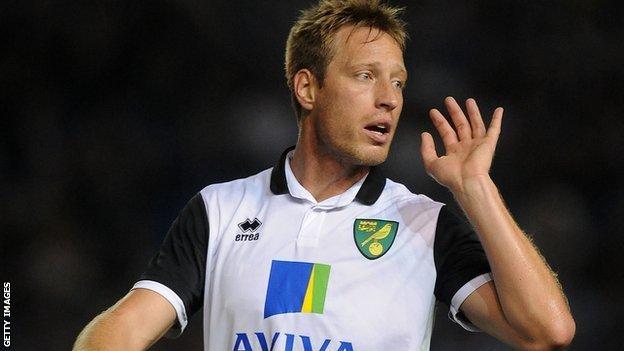 Norwich boss Chris Hughton has criticised striker Luciano Becchio for voicing his frustrations publically but added that the "door is always open" for a private chat.

The 29-year-old, who signed from Leeds in January, said he was "mystified" as to his lack of first-team football.

"Luciano knows that should not have gone out in the paper," said Hughton.

Becchio has played just 14 minutes, in the Capital One Cup against Bury at the end of August, this season. He joined the club in January after scoring 19 goals for Championship side Leeds

"But that is something between myself and Luciano. He is a good lad and my door is always open."

Luciano has played just 14 minutes of football this season and voiced his disappointment to the Daily Mirror.

Hughton added: "What he has done is make everyone aware of the frustrations he feels. What he has to do is make those clear through the appropriate channels.

"The relationship I have with Luciano is very good and he is someone I have got a lot of respect for.

"We made a decision we wanted to keep him and that is why we have not allowed him to go out on loan.

"It is all about managerial decisions and we brought in three strikers over the summer, so there was always going to be competition."

Norwich have lost seven of their opening 12 Premier League games, most recently suffering a 2-1 defeat to Newcastle.

They will also be without wingers Anthony Pilkington and Robert Snodgrass for this Saturday's crucial match against Crystal Palace, who are three places and four points behind the Canaries.

Hughton added: "Will he [Becchio] be in the squad this weekend? Yes, he will. He is a very good lad, but in this circumstance he needs to do things in the appropriate manner."