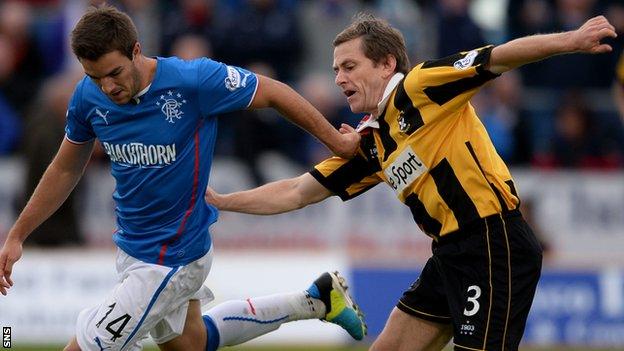 And the 35-year-old, who left Aberdeen in the summer, is in good position to take the job permanently.

"But Gary will get a chance to prove himself. He wants the job and is in pole position if he gets the results."

Former Dundee United manager Paul Hegarty will assist Naysmith on a voluntary basis at the moment.

Naysmith trained with former club Hearts in the summer, but the the Edinburgh club were penalised with a signing embargo for going into administration.

The left-back, who also played for Everton, Sheffield United and Huddersfield Town, instead headed to New Bayview as a player.

However, Aitchison exited East Fife with the Methil outfit sitting second bottom of League One and Naysmith is forward to his new challenge.

"It's been a whirlwind," he said. "I started the season playing with Hearts, but because of the embargo couldn't sign there.

"Then I went to East Fife and the manager asked me to become his assistant - now I've been asked to be caretaker.

"I love it, I really enjoy the club. It's non-stop. I can't believe what's happened.

"I'll have to go through the same interview process as everyone else who applies for the job, but I'm really keen to become the permanent manager."

Aitchison, a former coach at Hearts and Cowdenbeath, was appointed East Fife manager in June,