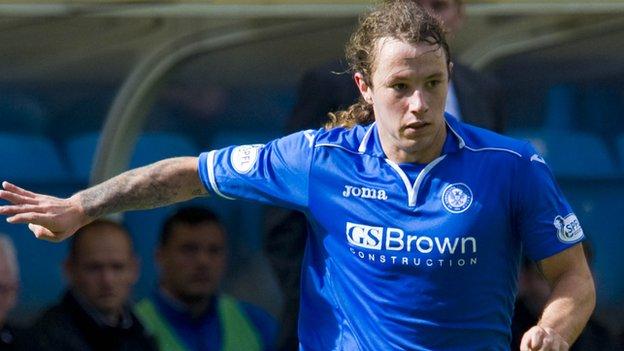 St Johnstone manager Tommy Wright is refusing to put a price on Stevie May for fear of unsettling the striker.

Rotherham United boss Steve Evans this week claimed that the Saints value the 21-year-old at £800,000.

However, Wright said: "We haven't quoted any figures and we won't be quoting any figures.

"We know our valuation of the player and, if and when that's met, and it suits Stevie as well, that's when something will happen."

Peterborough United failed with a bid for May in August, with Wright describing their offer as "insulting".

Meanwhile, Evans said his English League One club had suggested a £300,000 price for the Scotland Under-21 international, who has scored 11 goals this season.

"I'm not going to be putting figures on Stevie's head in the public domain," said Wright. "I don't think it's fair on the player.

"That's two dealings we have had with English clubs and they seem to have ruffled a few feathers."

Wright will not include new signing Lee Croft in his squad for the Scottish Cup fourth-round clash with Livingston on Saturday.

The winger re-signed for Saints after being without a club since leaving Oldham Athletic at the end of last season.

"He needs a couple of games and unfortunately the under-20 game was cancelled on Tuesday," explained Wright.

"We have got to make sure we don't overwork him or put him in too early because it has been a long time since he has played any football.

"Other than the long-term injuries, we have a fully-fit squad, so there is no big rush to bring him back.

"He's a player that can make things happen in the final third, has a good delivery and a good eye for goal as well. I'm looking forward to getting him fit."